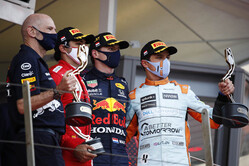 While it hasn't exactly been tears and tantrums so far this weekend, we have seen a lot of unhappy drivers... and a few unhappy team bosses.

Lord High Executioner, Helmut Marko appears spoiled for choice, with Sergio Perez and Yuki Tsunoda both in the Austrian's firing line. After all, he can hardly drop the Mexican in favour of the Japanese can he? We wonder if he still has Brendon Hartley on speed dial.

Admittedly, it has been a fairly dramatic weekend thus far with every likelihood of further drama over the next couple of hours.

Suffice to say, we could see a lot more unhappiness, not to mention "frustration", "disappointment" and "confusion" before the day is out.

Indeed, if past events are anything to go by, we could be witnessing a few tears, maybe evens some tantrums, shortly after the lights go green, for if ever the old adage about 'to finish first, first you've got to finish', applied, this is the place.

Year after year they are reminded, yet year after year drivers insist on believing that on the notoriously punishing streets of the Principality, the race can be won at the first corner, the infamous Ste Devote, or the equally notorious Mirabeau or the Nouveau Chicane. But do they listen?

It seems only right that the home of the legendary Casino features a race that is pretty much a lottery, and one which is almost pointless to predict, for the very nature of the track, not to mention the 'enthusiasm' of the drivers makes pre-race analysis almost pointless.

Suffice to say, we have a Ferrari on pole alongside one of the main world championship contenders, both drivers known for their - let's call it, no-nonsense approach to racing, their elbows-out grim determination.

They are ahead of two drivers for whom "disappointed" and "frustrated" could be middle names, Valtteri Bottas and Carlos Sainz, both of whom have points to prove.

Then comes young pup Lando Norris and an equally determined Pierre Gasly, both of whom will not only have an eye on the drivers ahead but a certain seven-time champion looming large in their mirrors.

Throw in the fact that said seven-time champion starts alongside a four-time champ who has made a number of needless errors in recent years and you can see where the "tears and tantrums" theme is coming from.

With Haas claiming that Mick Schumacher's crash cost the team around $500k, the American team would be well advised to place a large swear-box beside Guenther Steiner on the pit-wall, for today could prove very expensive and the Italian's expletives at a dollar a time could still go some way to off-setting the cost.

Though there is no rain predicted, it is likely to be cool and overcast. Furthermore, as we know from experience, conditions can change dramatically very, very quickly.

Pirelli expects the afternoon to be reasonably straightforward strategically, as a one-stop race with quite a wide pit stop window and a number of different possibilities.

The two main variables governing the strategy are safety cars - a common occurrence here - and the weather.

The leading ten will all start on the soft tyre, and that choice is likely to be mirrored by most of the runners but either the medium or the hard can be used for the second stint.

There's also a chance that some drivers further down the grid might try the opposite strategy: running the harder tyre first, before moving onto the soft at the end.

The pitlane opens and one by one the drivers head out. However, as Leclerc leaves his garage his car subsequently grinds to a halt. "No, no, no, the gearbox guy" he cries. Despite his gearbox being given the all-clear earlier following yesterday's crash there is clearly a problem.

The clock ticks down and as the youngster sits in the Ferrari which has been pushed back into the garage, it looks as though he's going to run out of time and will have to start from the pitlane.

Indeed, Ferrari confirms that there is an issue and that the Monegasque will have to start from the pitlane.

Consequently, Verstappen starts from 'pole', ahead of Bottas and Sainz, with the Finn handed a clear line of attack.

18 minutes before the start, Ferrari announces that Leclerc will not start the race, his car suffering "an issue with the left driveshaft which is impossible to fix in time for the start". Bitter disappointment for the youngster.

As he walks disconsolately back through the paddock, he is consoled by everyone he passes.

In a late twist, Toto Wolff admits that strategically Mercedes had prepared a 'B option' in case Leclerc didn't make the start or was handed a penalty.

Other than the leading ten, Ocon, Mazepin and Schumacher start on softs. Ricciardo, Raikkonen, Russell, Alonso and Latifi are on mediums, while Stroll and Tsunoda are on hards.

The field heads off on the warm-up lap, all getting away cleanly.

They're away! Bottas appears to have the better start, but the grid layout and the sheer proximity of the first corner plays to Verstappen's advantage.

No incidents at Ste Devote, indeed no incidents at Mirabeau, Portier, or the Nouveau Chicane or Rascasse... finally they're learning.

At the end of lap 1, it's: Verstappen, Bottas, Sainz, Norris, Gasly, Hamilton, Vettel, Perez, Giovinazzi and Ocon. Alonso is up to 14th, while Stroll, Raikkonen, Latifi and Schumacher have already made up places.

The camera cuts to Leclerc's garage where his mechanics watch the action on a TV monitor.

After 4 laps, Sainz has dropped 2.7s behind Bottas and into the clutches of Norris.

Hamilton warns that it's "hard to follow", a situation that the Briton - and his colleagues - would be best to accept considering the nature of the track.

As Mazepin has his time deleted, Sainz is given a 'gee-up'.

As is so often the case here, the initial threats out of the way, the race settles down and becomes somewhat processional.

Lap 11 sees Verstappen posts a 16.265 as Norris and Gasly trade fastest sector. Bottas has now slipped 1.8s behind, but 2.1s ahead of Sainz.

At which point Mazepin is shown the black and white flag for his continued transgressions at Turn 10.

Vettel is told to "push on" if he wants to clear Raikkonen at the pit stops. His former Ferrari teammate is currently 12th.

"Show us how much more pace you've got," Bottas is told. The Finn is currently 2s down on Verstappen.

Like Mazepin, Norris is shown the black and white flag.

To add to his problems, Mazepin is now being shown the blue flags as he is about to be lapped.

"Is Bottas struggling," asks Sainz. "Yes, we think he is," comes the reply.

"Gaps are starting to appear," Hamilton is advised.

"There's not much left in the tyres," warns Bottas.

At which point, at the end of lap 29, the world champion pits. Switching to hards he rejoins in 8th, 14s down on Perez.

Next time around teammate Bottas pits, however there's an issue with the right-front. Indeed, they cannot get the wheel off. Again and again the crew try, but the wheel nut will not budge.

The Finn climbs from his car, his race over, as Hamilton complains about being released into traffic.

Norris pits as does Vettel, while teammate Stroll clouts the barrier at the Swimming Pool exit..

"What is happening guys," asks Hamilton, who has lost position to Vettel.

Sainz pits at the end of lap 32, thereby promoting Perez to second.

Hamilton continues to complain about the timing of his pit stop. He should be in his teammate's position.

Disaster for Mercedes, which confirms that Bottas suffered a "machined" wheel nut, while Aston Martin benefits.

Verstappen pits at the end of lap 33, rejoining just behind his Red Bull teammate who has yet to stop.

"Lewis, we're in danger of losing position to Perez as well." The Briton doesn't take it well.

Perez pits at the end of lap 35, rejoining in 4th.

"Good job," Perez is told, "we've got the jump on Vettel, Gasly and Hamilton.

Elsewhere, Ricciardo has pitted and rejoined in 13th.

After 38 laps, those drivers still to stop are: Stroll, Raikkonen, Alonso, Latifi and Tsunoda.

Verstappen is told that the wear to his first set of tyres was excellent.

As he hunts down the leader, Sainz complains that the blue flag lighting panels are not flashing.

Raikkonen pits at the end of lap 43, rejoining in 12th, ahead of Ricciardo, on hards. Latifi also pits.

"Tyre life to the end will be good," Perez is told.

Alonso pits at the end of lap 46, and as the Spaniard rejoins in 13th (on softs), up ahead Ricciardo suffers the indignity of being shown the blue flag. Meanwhile, teammate Norris is running third.

Told that his stint is being extended, Stroll is advised that his team is seeking to overcut Ocon and Giovinazzi. The only other driver still to stop is Tsunoda who is currently 14th.

"Where is everyone in front of Gasly," asks Hamilton, "he's so slow."

Oh dear, Ricciardo is about to be lapped by his McLaren teammate.

"I'm struggling, this car is awful on these tyres," warns Norris. Currently third, the McLaren driver has a 5.7s lead over Perez.

Stroll finally pits at the end of lap 58, the Canadian rejoining on softs in 8th ahead of Ocon and Giovinazzi.

Tsunoda is the only driver still to stop.

"Lots of drivers starting to make mistakes," Norris is warned, "so full concentration."

Giovinazzi is all over the gearbox of Ocon's Alpine.

Stroll is under investigation for failing to keep to the right of the pit lane exit.

Sainz has fallen 7s behind Verstappen, while Norris is just 1s ahead of Perez.

Tsunoda pits at the end of lap 65, the AlphaTauri driver rejoining in 16th on softs.

"Little by little it is coming back," says Sainz of his tyres.

Hamilton is told he has a "free pit window ahead of Stroll", suggesting that the point for fastest lap is on the table.

The Briton subsequently pits for softs, as Tsunoda posts a 14.037 - a new lap record but ineligible for a point.

"Verstappen is the car behind," Hamilton is told, "you do not need to do the fastest lap immediately."

Enquiring about the possibility of fastest lap, Perez is told that it "isn't on".

Hamilton has found some pace, certainly enough to keep him ahead of Verstappen.

Raikkonen is eleventh, ahead of Ricciardo, Alonso, Russell, Latifi, Tsunoda, Mazepin and Schumacher.

Among the first to congratulate Verstappen as he climbs from his car is Leclerc, a nice gesture from the Monegasque.

Tears and tantrums? Well, Leclerc certainly would be allowed a few tears, maybe even a tantrum, but the youngster appears to have taken it philosophically.

At Mercedes, on the other hand, both drivers would be excused for the odd tantrum, particularly Bottas who lost an almost certain podium due to that wretched wheel nut.

Ricciardo will probably shed his tears behind closed doors, the Australian having had a thoroughly miserable weekend, while teammate Norris has celebrated his new contract in the best possible way.

Leclerc would have every right to throw a tantrum, Ferrari should have bitten the bullet and changed his gearbox, for even a grid penalty would have been better than a DNS.

That said, there is consolation for the Maranello outfit in the form of Sainz' result, but on reflection the Italian team must wonder what might have been.

Other than Perez, there were strong results from Gasly and Vettel, with Aston Martin, against all odds, scoring a double-points finish.

Then there's Giovinazzi finally getting Alfas Romeo on to the scoreboard.

A processional event that will not stand up to second viewing, but one - considering the fact that Red Bull now leads both championships - that couple prove pivotal in the months ahead.