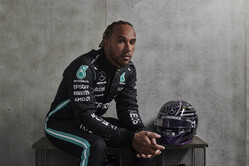 Lewis has it. Max has it. Vettel used to have it. Bottas is not sure he has it, which means he does not.

The utter belief in all circumstances, regardless of outcome that day, that you are at the top of your game, you made all the right moves, and it is simply a matter of time before circumstances conspire to provide you the wins which you know God Above has reserved for you.

Never more so than in the age of near-flawless mechanics, cunning strategy, endless physical conditioning and perfectly balanced diets, has the mind been so ruthlessly singled out as the weakest link.

Thinking, "It might go well today, I'm ok, and all these guys around me are amazing Demi-gods of Olympus", simply places you in the lower half of the field. Worse still is thinking, "That other driver is simply better than me. Full. Stop". This is 'hello, and welcome to shooting for number two' as the pinnacle of your career.

Each driver needs the crazy belief that every other driver out there is a potential world champion, deserving of utter respect, while they, and they alone, are in fact the greatest of all these totally equal Demi-gods... A conundrum is it not?

Utter respect. A cool acceptance of not finishing first, or indeed of finishing outside the top ten or last, coupled with an unfailing belief in your own ability to finish first because you are simply unbeatable.

The chassis tune, the non-rubbered-in side of the track, tailwinds down the back straight, poor pit stop, poor strategy, poor stewards, software glitch, poor application of track limit rules, lack of real-world on-track driving, mis-calibration of the simulator, the tub not being built around the length of your femur, the head of engineering hates me and has built the car to favour the height and weight of my team mate. So many external things stopping one being the Demi-god of one's own dreams!

Look inward dear Zen driver. What do you see? Umm... Quite.

The mental aspects of sport have grown immensely since the day Roger Banister broke the "impossible" barrier of the four minute mile. The moment Roger broke the impossible it started tumbling, and has continued to tumble, albeit a tad slower in recent post-Armstrong days. Tony Hawk did the triple, and all of a sudden a few years later we have ten-year-olds landing them. The stuff of recreational drug induced dreams only a decade or so ago, now happening at a half pipe near you on a weekly basis...

In Barcelona the top eight were separated in qualifying by one full second. That means if we lined them all up at the end of those flying laps less than 60 metres would be the distance from first nose cone to last rear diffuser. Given each car is around 5.7 metres long, that gives us fourteen modest metres of space between all eight cars. Dividing that equally gives an average gap of 1.8 metres, less than the average height of a man, between each car... after flying around almost three miles miles of track at speeds well over 200 kph!

Does Lewis do this because the car is better suited to his lower leg length? His helmet is two microns lower in the cockpit? He and Toto both give the car a hug prior to qualifying? James Allison does a Happy Dance on Lewis' side of the garage, and only ventures to Bottas' side of the garage to place his empty sparkling water bottles in the recycle bin?

Or is it because Lewis can accept all his competitors are Demi-gods, and yet know, simply and unquestioningly he is first among equals?

The cognitive dissonance is acknowledged, accepted, and then cheerfully ignored. No porridge required... When it takes super human effort to extract the smallest of winning fractions, because all present are mighty sportsmen, what is that final capability that allows Lewis to find that 0.179% week, after week, after week?

In the, mostly unlikely, scenario whereby you find yourself lining up next to Nikita Mazepin at your local go-kart track, in equal machinery, he will simply bury you. It will not be close. The guy currently specialising in ignoring waved blue flags, and finishing multiple laps down on Lewis, come the chequered flag, would run rings around us weekend hacks, and day dreamers. He also believes F1 is not working for him yet because the car is crap, no one respects him as they should, and F1 is biased against him just 'cos. He knows he should be on the top step week in, and week out, on his way to multiple drivers' championships.

Another perspective; the race of champions uses such an odd mix of cars, and track concepts, to ensure that all these top guys could turn up, have fun, and utterly dismiss it when Carlos Von Wide-Rims who only has a claim to fame as winning the Aldi Car Park 500 beats them. Simple, nothing to do with them. It was the cars, the track, the rules, the marshals, and the crowd. Possibly also the jet lag, lack of personal chef (she was on holiday), and not being allowed to walk the track before the race. Easy! Mind game intact.

Vettel is trying to fake it until he makes it again right now. No one, most probably including Vettel himself, understands how a four time world champion can misplace his self-belief so terribly. Bottas is a world class driver. He is simply too honest with himself to utterly rid his mind of the sneaking idea that Lewis is better. They have been driving the same car for years and Lewis keeps beating him. Nico knew how to do it. He could not get to Lewis' ultimate level, so he rocked Lewis' mental boat, and lowered him to his own level where he could, and did, beat him.

Currently Max has it unquestioningly. Yet if, if, he were to be beaten day in, and day out by Lewis for three seasons, even he would struggle to maintain the dichotomy in his mind necessary for total self-belief. Best to stay in the Red Bull and have other options than looking inward for failure.

Lewis has a resolute faith in himself from way, way back. Michael Schumacher had it, as did Ayrton, Nigel, Prost, indeed, all the greats.

It is an ability to acknowledge and accept the cognitive dissonance, and then move back to a dead-centre, unshakable, unquestioning state of mind where you know, inside, and out, awake, and asleep, that you are simply destined for the greatness you know is within you. It makes no sense, and yet it cannot be faked. You cannot pretend a bowl of porridge is going to solve it. Or a new front wing. Or a fractionally lower seat within a slightly wider cockpit. Or even James Allison doing his happy dance each day at sunrise on your side of the garage.

No. It comes from within. It comes without question. It is a faith within yourself, and about yourself that transcends reality, sanity, and reason. Yet it is valid, and life affirming. And you either understand and embrace that. Or you do not. And then what? Well, never mind.