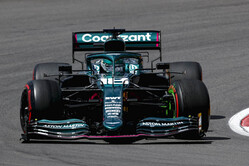 The updates, which were mainly related to the floor of the AMR01, were only available to Lance Stroll in Portugal, but this weekend Sebastian Vettel will have them also.

However, with the German out-qualifying his teammate, and subsequently finishing ahead of him in the race, it has been speculated that the updates didn't work as hoped for.

Over the past weekend it was widely and accurately reported by the specialist Formula One media that we had brought to Portimao a number of aero updates, centring mainly on our car's floor," he tells the team's website. "We had developed them in CFD [computational fluid dynamics] and the wind tunnel, as is always the case with aero updates.

"Their purpose, as is also always the case with aero updates, was to add efficient downforce, in other words extra grip with minimal added drag.

"We brought only one set of aero updates to Portimao, and they were fitted to Lance's car. Ideally, you always want to be able to update both your drivers' cars simultaneously, but that is not always possible. Aero updates take time to invent, test, prove and manufacture, and are made in series, not in parallel.

"So sometimes you find you have time to manufacture only one set before it is time to transport the cars to the next Grand Prix. But by this weekend's race, in Barcelona, we expect to have made enough new parts to equip both drivers' cars.

"For reasons that had nothing to do with the aero updates fitted to his car, Lance had a troubled qualifying in Portimao, which is anyway a circuit whose characteristics do not suit our car particularly well.

"In Q1 he lost a few tenths in traffic, which is always a danger because Q1 is the session in which all 20 cars are taking part and therefore on-track congestion is invariably most marked, and the wind was unpredictable and therefore unhelpful, too.

"As a result he just failed to get through to Q2, and was left with a P17 grid slot for Sunday's race.

"Sebastian drove well in Q1 and Q2, and progressed smoothly to Q3, where he too struggled somewhat and therefore ended up in P10.

"The post-race analysis duly showed that Lance was able to access greater race pace than was Sebastian, the result of the aero updates uniquely fitted to his car, which he used to good effect.

"Creating Formula One aero updates is something of an art. It is based on science and engineering, of course it is, but it is also a frustratingly unpredictable process.

"The conflicting variables that can interpose themselves between CFD and wind tunnel data and circuit performance are a bugbear well known to all Formula One engineers, although we are fortunate that we do not have a correlation problem between our development tools and the racetrack.

"Equally, and importantly, your target is always a moving one: in other words, the cars nearest in performance to your car are also being updated aerodynamically on a more or less continual basis, and you never know when one of your closest competitors is going to deliver an aero update that confers a significant chunk of lap time.

"So all you can do is continue to work methodically, around the clock, to make sure that you are always optimising your own team's available resource. And that is most definitely what we are doing at Aston Martin. Roll on Barcelona!"