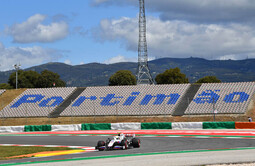 The third round of the 2021 FIA Formula 1 World Championship began with practice on Friday at Autodromo Internacional do Algarve as teams prepared for Sunday's Portuguese Grand Prix.

Two 60-minute sessions - FP1 and FP2 - on the 4.653-kilometer (2.891-mile), 15-turn circuit were held under partly cloudy conditions as the Portimao track hosts only its second-ever Formula 1 race weekend - the first having been just six months ago in October 2020.

Both Mazepin and Schumacher went straight to work as pit-lane opened, both drivers searching for grip early in FP1 as a very green track awaited the field. Run plans were identical across the two VF-21's - a wakeup stint on the Pirelli P Zero Yellow medium tires followed by baseline laps running new sets of the Red soft compound - on which both drivers set their respective best times. Schumacher posted a lap of 1:21.929 to place 18th with Mazepin recording a 1:24.224 for 20th overall. The morning outing wrapped with a final stint on the used softs - both drivers logging 29 laps each in the session.

Lap times dropped in FP2 as the track began to slowly rubber-up. Schumacher ran a short stint on medium tires before bolting on a set of softs for a qualifying sim - producing a best lap of 1:21.537 from the F2 Champion. He finished his track time with a high-fuel run utilizing the White hard tire for the first time before pitting for his earlier set of softs. Mazepin began the session on the hard compound before he too switched to softs for a qualifying sim - a 1:22.638 the rookie's fastest run. A 10-lap high-fuel stint on mediums followed before a final pit onto softs to end the session. At the checkered Schumacher sat 18th on the timesheet with Mazepin 20th.

Nikita Mazepin: "On average, if you take all the circuits that we go to in F1 and F2, this is one of the least grippy tracks - which is a bit of a shame as the layout is really cool. If you could go a bit faster, and with a bit more confidence through it, it would be nice. We have what we have. The grip is building up with all the laps we're doing so that's good. There are fine lines here and, in that respect, I think we had a good Friday. There's a lot still to be extracted and it's tomorrow that matters."

Mick Schumacher: "It was definitely a lot more slippery than I'm used to but it was fun. We had a very lively car out there, it brought back memories from F3 and go-karting. It was interesting. The track is quite impressive and quite intense. It wasn't difficult to build confidence here, it's just about getting a clean lap and that's very difficult if the car is difficult to drive. I think we're getting into a window where it's more and more resilient. I'm also getting more comfortable with a lively car. If we do our jobs, which we always do, we should be in a good window tomorrow for qualifying."

Guenther Steiner: "For us it was a good FP1 and FP2 as we did a lot of laps - 115 in total I believe. That's good as it meant the drivers got to drive a lot. We learned that the conditions were not easy, the track was a little bit slippery, and the wind picked up quite a bit in FP2. But that was the same for everybody, I know that. Overall though it was a good session. Hopefully we can take what we learn into tomorrow and make progress from there. I'm pretty happy with the day."