Szafnauer confident Vettel is "getting on top" of AMR21 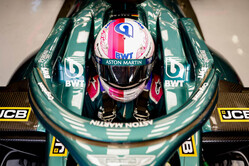 Citing lack of pre-season running, Aston Martin boss, Otmar Szafnauer insists that it will come good for Sebastian Vettel, who, we are assured, isn't "beating himself up" over his lack of results.

On paper, the poor, almost anonymous form that was Sebastian Vettel's final couple of seasons at Maranello appears to have continued.

Qualifying 18th in Bahrain and 13th in Imola, the results of both races show the four-time world champion finishing 15th, one lap down on the winner.

While some fear last week's somewhat unnecessary confirmation of Nico Hulkenberg as official reserve - unnecessary because the German had confirmed it only a week earlier - Aston Martin boss, Otmar Szafnauer insists that things are improving for Vettel.

At the heart of the issue, according to Szafnauer, is the fact that Vettel is with a new team, a situation made more difficult by the lack of pre-season testing.

"For Seb, the philosophy of the AMR21 is completely different and that does take time to learn," says Szafnauer. "I spoke to Checo (in Imola) and he’s gone to Red Bull, which has a different philosophy to us, and he said similar.

"It’s going to take seat time to be able to get on top of the fine margins needed for getting the most out of the car," he admits. "The more seat time, the better.

"Seb was not in contention in Imola, through no fault of his own, but if you looked at his pace on the dry tyres, it was promising. I think that shows he’s starting to get on top of the car."

Other than the fact that pre-season testing was reduced to just three days, Vettel's efforts were further compromised by poor reliability, leaving the German with the lowest completed mileage (117 laps) of the 20 drivers on duty - Pierre Gasly (237 laps) having completed the most.

"My biggest regret is that we weren't as reliable as we should have been in the winter," admits Szafnauer. "It cost Seb a significant amount of his day and a half of running. Had we had more testing, I think he'd be in a different place on the learning curve.

"Seb has very high expectations... he will work tirelessly to get better and move up that learning curve, but he's not beating himself up," he insists. "He'll take that bit of frustration and be even more determined to get up to speed quickly.

"We have to look really hard at one lap pace as it looks like the race pace is a little bit better," says Szafnauer of the AMR21. "Although conditions in Imola were tricky with the wet and drying surface.

"Lance did a brilliant job to come home seventh - later demoted to eighth as a result of a five-second penalty - in a tough race. Unfortunately, Seb had the gearbox issue and a penalty, but we’ll look through all the data. We’re working hard to move forward."