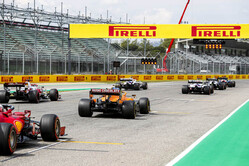 F1, the FIA and all ten teams are to discuss sprint races this week in order that a successful vote can go before the World Motor Sport Council when it next meets in July.

Previously, while most teams were in favour of the concept, there was concern over financial compensation in terms of wear and tear - and, God forbid, Russell/Bottas style close encounters – in addition to fears over the possible 'dilution' of the worth of the main event, the race on Sunday.

With the latter factor in mind it is understood that the races will not be known as sprint races, but rather sprint qualifying.

According to Speedcafe.com, tomorrow's meeting will consist of representatives from F1 and the FIA together with the Sporting Advisory Committee, which essentially comprises the sporting directors from the ten teams.

If agreed, the proposal will be passed to the F1 Commission and then on to the World Motor Sport Council (WMSC), which must vote on the concept before it can be included in the regulations.

With the WMSC due to meet on 9 July - just one week before the British Grand Prix at which the sprint qualifying concept is to make its debut - time is of the essence.

Speaking at the weekend, McLaren boss, Andreas Seidl was confident that the proposal will finally get the green light, with the team's financial fears having been allayed.

"We have to wait now for the final announcement of Formula One, but we're happy with the outcome," said the German.

"I think Stefano (Domenicali) tried to find a compromise which works for everyone and with what we have seen now at the end we are very happy with and expect that Formula 1 will do an announcement here soon," he added.

"We're looking forward to try this this year to see if that's actually something which can be established as standard going forward for some races each season."

If the green light is given, Sprint Qualifying would make its debut, as previously mentioned, at Silverstone, with further outing at Monza and Interlagos.

Though still to be confirmed, the proposal is that Friday's second practice session would become qualifying for the sprint race, which would run for about 100kms. The finishing order of the sprint race would then decide the grid for Sunday's Grand Prix.