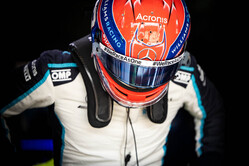 Other than Max Verstappen's (almost) faultless drive to victory, Lewis Hamilton's amazing comeback and Lando Norris' inspired drive to third, the other big talking point following Sunday's Grand Prix was who was to blame for the high-speed crash that caused the race to be red-flagged.

Barely had the dust settled following the high-speed clash at the infamous Tamburello corner, and George Russell having asked Valtteri Bottas if he was trying to kill them both, than fans, pundits and all weighed in with their opinion as to who was to blame.

While both drivers blamed the other, the stewards declared it to be a racing incident and deemed no further action was necessary.

However, in his regular post-race debrief, former team boss, champion constructor and now F1 MD, Ross Brawn appeared to suggest Bottas was more to blame for the incident.

"There will no doubt be an intense post-mortem of the accident," wrote Brawn on the official F1 website. "The positive thing is that both drivers escaped unhurt and the cars held up on impact to show how far we've come regarding the safety standards.

"Imola is quite a narrow track so there's not much space," he added. "When you add wet grass either side from the rain, it becomes very, very tricky.

"I'm sure both drivers will analyse the incident and learn from it but it did look like Valtteri drifted across and left George nowhere to go."

At a time Toto Wolff fears the cost of repairing the damaged Mercedes could impact planned upgrades due to the budget cap, having reviewed the incident, Russell has reigned back on his previous claims.

"When you can review everything and look at it in slow motion and everything, and from certain camera angles, it all looks very, very different," said the Briton. "One camera angle makes it look one way, another camera angle, like I said, when you watch it from behind on the CCTV footage it looked quite clear, in a different opinion.

"I was more frustrated because of the speed of the incident," he admits. "I've never, ever had a crash at the end of a straight when we're absolutely flat-out, and we've all seen the dangers of motorsport very recently and to be honest I would have reacted exactly the same had it been battling for the win, battling for ninth or battling for last. Because I just thought it was unnecessary and it was avoidable.

"As I said, Valtteri did nothing that was outside the rules, but you have to take an element of responsibility and consideration into the fact of the conditions. There's certain things you can do in certain ways when everything's stable, but when it's a damp track, there is a kink, and you're pushing someone towards the grass, onto the damp patches at over 200 miles an hour... there is a high risk of an incident, and that is why I was very disappointed because I just thought that was beyond a lack of respect, really, not towards me, but just a lack of respect towards these cars.

"Could it have been avoided? Yes. Was Valtteri in the wrong? Probably not," the Briton continued. "Could he have done something slightly more? Maybe. Was I in the wrong? I caused the crash by spinning, but was I wrong to go for that overtake? Absolutely not. You would have been foolish to lift at that position."

In reaction to Toto Wolff's claim that he should have approached the situation differently because he was essentially battling a Mercedes - a ludicrous comment when you consider the pair were battling on track for ninth - Russell said: "I've never been in a position where I'm fighting against a Mercedes. Williams has not been fighting against Mercedes for probably five years. So it's not even crossed my mind how I would fight against a Mercedes.

"As I said, it was not a reckless move," he insisted. "The move was totally on. Valtteri defended hard, and he was fair to do so. But we were three quarters of the way down the so-called straight. It wasn't like I lunged him from twenty metres back and crashed into the side of him.

"It was unfortunate, the incident would not have happened if it wasn't damp and if DRS was closed. It was just an unfortunate set of circumstances."