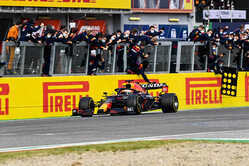 The thrilling Imola race, with Pirelli as title sponsor, was interrupted by a red flag after 34 laps to clean debris off the track following an accident. The red flag allowed teams to service the cars and change tyres, meaning that the final part of the race was a 29-lap sprint.

Rain before the start of the race meant that nearly all the cars started on Cinturato Green intermediates, with just four on the Cinturato Blue full wet. There were two safety cars before the red flag, which occurred when the track was almost dry. During the second safety car period all the runners moved onto slick tyres. Everyone selected P Zero Yellow mediums once the crossover point was reached, apart from Haas, which went onto the P Zero Red softs.

Verstappen took the lead at the first corner of lap one from Mercedes driver Lewis Hamilton, who had started from pole. Red Bull driver started from the head of the field following the re-start on the medium tyre and held onto his advantage until the end. He then maintained the lead after stopping before Hamilton for P Zero Yellow medium slicks.

Hamilton finished second following a fantastic fightback and claimed the extra championship point for fastest lap, despite being a lap down before the re-start after going off the track. McLaren's Lando Norris was third, using the P Zero Red soft for the final stint.

The combination of rain, safety cars and red flags meant that strategies were a question of reacting to rapidly changing circumstances. Most drivers followed a broadly similar run plan though: starting on Cinturato Green intermediates and then switching to P Zero Yellow mediums from just before the red flag all the way to the end of the race.

Mario Isola: "We had a red flag that split the race into two distinct parts following an incident that underlined the difficulty of Imola, which was made even more complicated by the uncertain and cool weather. With no previous running on the intermediate and wet tyres over the weekend, teams had to work out the crossover points as they went along. But a clear dry line emerged, with Verstappen and Red Bull timing their stop perfectly to move ahead of Lewis Hamilton in the pits. Once the race was re-started after the red flag, most of the drivers used the medium tyres, which provided a good balance between performance and durability throughout the significant portion of the race that was dry. However, a number of the frontrunners - including Norris on the podium - switched to the soft for the re-start, which also performed strongly in the final run to the finish of a memorable race, where we were honoured to be title sponsor".