Bottas: We are now the hunter, not the hunted 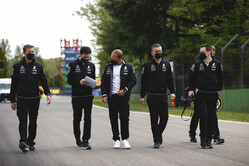 Valtteri Bottas says he is excited and motivated by the turn around in fortune which sees Mercedes the hunter as opposed to the hunted.

Despite what the history books might say, the season opener was Red Bull's to be lost... and lose it they did.

A brave strategic call coupled with the masterful defensive skills of Lewis Hamilton was enough to deny Max Verstappen, who had dominated every session, almost certain victory.

With Mercedes now genuinely appearing to be the underdog - certainly in respect to Red Bull - Valtteri Bottas claims he is excited and motivated by the fact that the German team is now the hunter and not the hunted.

"In testing we saw that we were on the back foot against Red Bull and the first race confirmed that," said the Finn.

"I don't feel exactly much pressure," he continued, "but I feel excitement and motivation. We are now the hunters, not the ones to be hunted.

"We try to take all the positives from that," he added, "I can definitely see the motivation in each team member's eyes to try and get them and work as well as we can together to again achieve the goals we have for this year."

Since Bahrain, Bottas has spent time in the team's simulator at Brackley, working on set-ups for this weekend as the German outfit seeks to get on top of the balance issues that compromised its efforts in the desert.

"I tried to work on the set-up, trying to find answers and trying to help the team as much as I can really to unlock the performance," he admitted. "I lost count on how many set-up items we tried in the simulator. But at least coming here, I think we have good toolbox of what to choose from.

"It seems to be that Red Bull at the moment, in higher speed corners, they are quite strong," he admitted. "Otherwise it's really marginal differences here and there.

"But Bahrain is its own type of circuit, and we'll see... for example, the tarmac in Bahrain is really rough and low grip. Here it is much more grippy and less prone to the tyre overheating on this track, so we'll see how it is.

"We've only seen the car from one track and we've seen quite big swings in performance from track to track. You never know, but I can't see anyone really dominating."