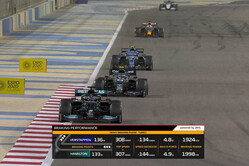 Amazon Web Services (AWS) and F1 are to introduce the first of six new F1 Insights graphics for 2021 at this weekend's Emilia Romagna Grand Prix.

The new additions mean a total of 18 AWS-powered stats will be available to fans by the end of the season.

F1 Insights powered by AWS are real-time racing statistics, displayed as on-screen graphics, that transform the fan experience before, during, and after each race by providing the data and analysis fans need to interpret driver and team race strategy and performance.

The first F1 Insight to be introduced this season, Braking Performance, shows how a driver's braking style during a cornering manoeuvre can deliver an advantage coming out of the corner. When executed well, braking optimizes a car's speed through the phases of cornering and enables the driver to gain a better position on the track.

This stat displays and compares drivers' braking styles and performance by measuring how closely they approach the apex of a corner before braking. In addition, it will show the key performance metrics that lead to how the car and driver perform together when cornering, such as top speed on approach, speed decrease through braking, the braking power (KWH) utilized, and the immense G-forces drivers undergo while cornering. Braking Performance builds on the existing Corner Analysis statistic, which shows how cars physically perform while cornering.

Braking Performance and the other five new F1 Insights powered by AWS (detailed below) will debut as on-screen graphics from April through December this season. Each new stat offers fans more visibility into the split-second action on the track and the decision-making behind the pit wall.

Car Exploitation shows fans when drivers are pushing their cars to performance limits in areas like tyre traction, braking, acceleration, and manoeuvring during key points in a race. The stat reveals the data in real-time by displaying a car's current performance during a race compared to a theoretical performance limit, and then calculates the time gained or lost per lap as a result. The stat debuts at the Canadian Grand Prix.

Energy Usage provides insights into how the high-tech engines powering F1 cars utilize energy during a race, including when teams unleash energy to overtake another car. The stat demonstrates energy flows through each component of the engine and shows how much battery energy is left at any given moment in a race. The engine uses a combination of internal combustion and hybrid systems that recover energy from braking and from the turbo charger. However, there are limits to the power unit's energy storage capacity and the amount of energy that can move through it during each race lap. Teams track this data to help maximize their car's performance at key moments in a race, determining when to deploy energy in steady streams to achieve the best lap times or unleash it in focused moments to gain or maintain position when battling another driver. Energy Usage allows fans to see those decisions in real time. The stat debuts at the British Grand Prix.

Start Analysis displays which driver was the quickest on the pedal and picked the perfect line, as well as which drivers struggled off the starting grid and why. Achieving the perfect start is a core driver skill, and Start Analysis will help fans understand how a driver's decisions earn or sacrifice an early advantage in the race. The stat debuts at the Italian Grand Prix.

Pitlane Performance analyses pit stop performance. Pit stops are an essential and precisely coordinated, but time-draining element of an F1 race. Pitlane Performance offers insights beyond a car's stationary stop time, like unpacking how the driver and team perform during each step of a pit stop in the pitlane and highlighting total pitlane time lost or gained due to how efficiently the team works. The stat debuts at the Japanese Grand Prix.

Undercut Threat helps fans anticipate which cars are at risk of being overtaken as the result of an "undercut", a race strategy where a chasing driver enters the pit for fresh tyres with the expectation that improved lap time resulting from the new tyres will allow the driver to overtake the car in front once that car has pitted. F1 introduced a similar stat, Pit Strategy Battle, in June 2020 to highlight an undercut battle as it happens and help fans assess in real time how successful each driver's strategy will be. Undercut Threat adds a new layer of predictive insight by analysing race performance before either car has pitted, adding to fan excitement and the sense of jeopardy around potential action to come. It visualizes data on gaps between cars, average pit loss time, and tyre performance to help identify which cars are at risk. The stat debuts November 19-21 at the Australian Grand Prix.

To create the new insights, F1 uses historical race data stored in Amazon Simple Storage Service (Amazon S3) and combines it with live data streamed from F1 race cars and trackside sensors to AWS through Amazon Kinesis, a service for real-time data collection, processing, and analysis. F1 engineers and scientists will use this data to leverage machine learning models with Amazon SageMaker, AWS's service that helps developers and data scientists build, train, and deploy machine learning models quickly in the cloud and at the edge. F1 is able to analyse race performance metrics in real-time by deploying those machine learning models on AWS Lambda, which is a serverless compute service that can run code without the need to provision or manage servers. All of the insights will be integrated into the races' international broadcast feeds around the globe, including F1's digital platform, F1TV, helping fans to understand the split-second decisions and race strategies made by drivers or teams that can dramatically affect a race outcome.

"F1 Insights Powered by AWS gives fans an insider's view of how car, driver, and team function together so that they can better appreciate the action on the track," says Rob Smedley, Director of Data Systems at Formula 1. "With this new set of racing statistics for 2021, we are going deeper than ever before. New Insights like Braking Performance and Undercut Threat peel back additional layers of race strategies and performance and use advanced visualizations to make the sport of racing even more understandable and exciting. Race car technology improves all the time, and thanks to AWS, our fans can appreciate how that technology impacts race outcomes."

"Data has become a critical piece of the story for modern sports," adds Darren Mowry, director of business development at AWS EMEA SARL, "and for F1 - where literally each second on the track produces more than a million data points - they require a partner that can translate that raw data into meaning in real time. AWS enables F1 to analyse its troves of data at scale, make better and more informed decisions, and bring fans closer to every phase of action on the track, from the starting grid, to cornering, to pitting. The world's premier sports organizations are using AWS to build data-driven solutions and reinvent the way sports are watched, played, and managed. Our work with F1 demonstrates how advanced stats can elevate the fan experience by revealing the tactics and strategies behind even the most seemingly straightforward elements of a race."