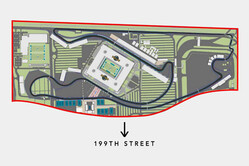 Miami could host a round of the world championship from next year after the city commissioners passed a crucial resolution.

The on-off-on-off event has been plagued by problems from the outset, with organisers having to abandon the track layout originally proposed and settle for a new layout that will incorporate the Hard Rock Stadium.

However, this too met local opposition from business owners and residents concerned at the noise and disruption to their lives.

Last week, Miami Gardens Mayor, Rodney Harris and the event's promoters, South Florida Motorsports put forward a memorandum of understanding and last night, the city commissioners met, and having heard arguments from residents and business owners, voted in favour of the resolution which states that the event "would be held in a manner that provides substantial economic and community benefits that directly support City residents and businesses".

Along with STEM programmes and paid internships for local college students, the promoters have also pledged $5m for the benefit of residents and businesses.

"We are happy that the commissioners reaffirmed again today that the Hard Rock Stadium entertainment complex is a regional facility that exists to benefit all of Miami-Dade County," said Tom Garfinkel, Vice Chairman and CEO of the Miami Dolphins and Hard Rock Stadium.

"We are glad to put this long delayed vote behind us, so we can begin to make the multi-million dollar investment required to bring a race here, and have positive and productive conversations with local leadership about the many benefits that a global event of this nature bring."

"We welcome the outcome from the commissioners meeting in Miami today," added Formula One Management, "and look forward to the continued progress to bring Formula 1 to Miami-Dade County.

"We expect this to be an incredible race on the F1 calendar in one of the most exciting cities in the world to visit."

"Our city council has flip-flopped on us, and it makes us very angry," residents' leader Brenda Martin Providence told WSVN. They decided to go into negotiations, and we just want them to know nothing with us has changed. We just don't want it in our neighbourhood.

"This is a billion-dollar corporation," she added. "You send us five million (dollars) and expect us to be okay with that? The money that it brings to them, it won't bring to us."