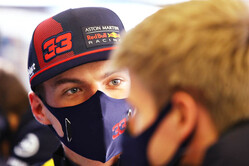 Zak Brown has reined back on his prediction that Max Verstappen will partner George Russell at Mercedes next season.

Speaking to the Daily Mail, last week, Brown claimed the deal is as good as done and that 2022 will see Verstappen and Russell line up on the grid for the German team.

"I think you will see Max and George there in 2022," said the American. "I think that is the obvious conclusion... Lewis wins title eight this year and is the winningest driver... they have a one-year deal with him. George is coming out of his deal and Max has a deal he comes out of.

"You have Max's experience and youth, you have George's youth," he added, "if I am Mercedes that is a pretty killer line-up for the next five years.

"The interesting thing is what do Red Bull do? That's a harder one to answer. It's tough for them. Everyone is locked down."

Asked about his claim in Bahrain, the McLaren boss appeared to rein back on his prediction.

"I don't necessarily think it," he said. "Someone just asked me 'what do you think the driver market will look like next year'.

"I believe George is out of contract and obviously has a Mercedes relationship and did a great job here in Bahrain. Max, I've never seen his contract but understand that there's probably a possibility for him to drive elsewhere and Mercedes and Toto are able to attract an awesome driver line-up.

"So, if those two guys are floating around, depending on what Toto decides with his current driver line-up, you could see that happening. I was asked the question - it wasn't a prediction, it was an opinion."

"It's speculation," laughed Christian Horner. "Maybe they're as likely to run Daniel and Lando!

"We're at the first race," he added, "we are obviously acutely aware of what the contracts with our drivers are. It's a bit early for speculation."

Onlooker, Toto Wolff, calmly admitted: "I want to keep out of the discussion that these two have about who's going to drive the Mercedes."