"He did the right thing," insists Horner 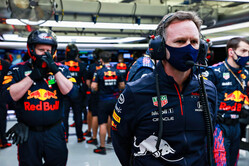 Red Bull boss, Christian Horner insists that Max Verstappen "did the right thing" in handing the lead back to rival Lewis Hamilton after exceeding the track limits while passing the world champion.

Having proved controversial all weekend, it seemed only fitting that Bahrain's infamous Turn 4 should provide the defining moment of the season opener.

Having relentlessly reeled in the race leader, Lewis Hamilton, Max Verstappen finally made his move on Lap 53, going around the outside of the Mercedes in the right-hander.

However, his team informed the Dutchman that he had broken the rules and would have to hand the position back to his rival.

Instead of waiting for a more opportune moment to hand back the lead however, Verstappen slowed almost immediately to allow Hamilton through.

"If I would have let him by later then it's an unfair way of giving the position back," said the Dutchman at race end. "Because then you're so close and it's an easy DRS pass, so I had to do it after Turn 10."

"It's very difficult," said the Briton. "We had an instruction from the race director to give the place back immediately. Max was very sporting and did that."

At the time of the incident, on being told to hand back the place, Verstappen had argued that he had the pace to leave the Mercedes for dead, and make up the 5s he would eventually be penalised.

"It was frustrating and Lewis had just enough to retain his position to the end of the race," said Horner, "but look, there's no guarantee we could have gotten the five seconds if that had been the penalty. So he did the right thing.

"Mercedes had very strong pace at the beginning of the race," said Horner. "Their degradation looked impressive, so Max could never get more than two seconds clear of Lewis.

"Going into the race we very much fixed our strategy on a two stop," he admitted, "They obviously went early again on their last stop. We stayed out ten laps longer so we had a better tyre for the final stint, but unfortunately Lewis had just enough to be able to hold on.

"It's tough to lose a close race like that, but we have to take a lot of positives out the weekend."