Hamilton: I got everything I could from the car 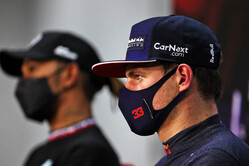 "That was the best I could do," admits world champion as he misses out on pole by 0.388s, thereby confirming Mercedes worst fears following testing.

Though Mercedes has clearly taken a step forward in the two weeks since testing it clearly wasn't enough, and while he might cite the 2021 rule changes as part of the problem, in the cockpit, Lewis Hamilton got on with the job, giving his all, as ever.

Speaking at the end of a hard fought qualifying session, the Briton admitted that he got everything from his car that he could.

"Congratulations to Max, he did such a great job, so fast on that last lap," said the Briton. "I absolutely gave it everything I had," he continued, "but unfortunately it wasn't good enough.

"There is always more," he insisted, "but that was the best that I could do, that is for sure. I got absolutely everything I could from the car.

"I think we did a really good job from testing to come here. The lads back of the factory they've really done such an amazing job. And our aero analyst, Kim, she's been giving such great information for us to be able to prove and get the car where we needed it to be closer to Red Bull.

"I think to be that close, considering I think in testing we were quite a bit behind, was good."