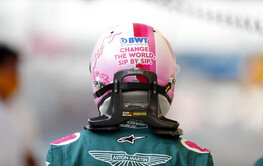 Sebastian Vettel has been summoned by the Bahrain stewards for allegedly not respecting double-yellow flags in the final moments of Q1.

Previously, the German escaped punishment along with three other drivers for not respecting a single waved yellow at Turn 8 after Carlos Sainz stopped on track with a technical issue.

However, the Aston Martin driver is now alleged to have not respected double yellows earlier in the lap following Nikita Mazepin's spin at Turn 1.

Vettel, along with a team representative, has to report to the stewards at 13:30 on Sunday.

Speaking in the moments after being eliminated in Q1, Vettel admitted to being upset and angry after his final lap was ruined by the two incidents.

"If I panicked now it wouldn't help," he told Sky Sports. "For sure I'm upset and angry," he continued, "it was not our fault in a way, not to make it through, but we have to take it and do what we can to prepare for tomorrow.

"It was a mess in the last sector warming up," he added, "I just made it across the line with less than one second and then I had two yellow flags, so not much we could do at that stage.

"I wasn't very happy in practice," he admitted, "I was feeling-wise a lot happier in qualifying but obviously I didn't get a lap in.

"We are not where we want to be, and on top of that I think I'm still learning, we are still learning. We are trying a lot of things to understand the car further.

"There was potential to be a lot faster," he insisted. "I think we still have a lot of work ahead of us.

"Hopefully tomorrow we have a good race. I think we can come up quite a bit and we'll see what the day brings."