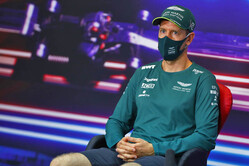 In naming his steed for the 2021 season, it comes as no surprise that Aston Martin driver, Sebastian Vettel turned to James Bond for inspiration.

In the past, the German with a very English sense of humour, has given each car its own unique name such as Luscious Liz, Randy Mandy, Kate, not forgetting Kate's Dirty Sister.

As he makes his debut for that most British of teams however, the Aston Martin driver turned to the British secret agent forever linked with the manufacturer, James Bond.

Speaking at the start of the Bahrain Grand Prix weekend, Vettel revealed that his 2021 steed is named Honey Ryder, after the character played by Ursula Andress in the first movie in the Bond franchise, Dr. No.

Following the release of the 1962 movie, the iconic image of Honey emerging from the sea in a white bikini, clutching two sea shells as she sang 'Underneath the Mango Tree' made a lasting impression... and not only on James Bond.

Asked his favourite James Bond and Aston Martin, Vettel replied: "I think the DB5 is probably the most iconic car. I think it's a very, very cool car and it's nice that it came back some years ago.

"And which movie? I quite like the first one. It kicked it off, obviously because of Honey Ryder."

As it happens, Bond's car in that particular movie was a Sunbeam Alpine, followed by a Bentley in From Russia with Love. It was in Goldfinger that the iconic Aston Martin DB5 made its debut, while in On Her Majesty's Secret Service, Bond (played by George Lazenby) drove a DBS.

Looking ahead to the season opener, despite a number of issues in pre-season testing that lefty him bottom of the pile in terms of mileage, Vettel remains confident.

"I’m quite happy," he said. "I think I felt quite comfortable straightaway despite the little running, I think I think I got along with the car.

"There's some things that I still need to work on and I need to get used to," he admitted, "but I think time will take care of these things.

"Even with more laps in the test, there will still be some things that would need some getting used to. So, yeah, I'm pretty relaxed. I think it will be okay."