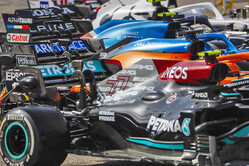 As if F1 bosses don't have enough to worry about, what with the continuing uncertainty over the pandemic, which, despite their insistence, still looks likely to play havoc with the race schedule as the season progresses, there is the question of what will happen next Sunday afternoon.

On the back of testing, everyone is salivating at the thought of Mercedes and Red Bull finally going head-to-head on a regular basis, hopefully with the likes of McLaren snapping at their heels.

Should the Black Arrows claim the front row on Saturday however, then go on to dominate the podium 24 hours later, there is no doubt that alarm bells will be ringing in F1 Towers, for ahead of a season which will see a number of teams carry out little or no development, the likelihood of Lewis Hamilton and his team claiming another brace of titles may well force even some of the big guns to switch their entire focus to 2022 feeling that 2021 is a foregone conclusion.

Though the cars have been carried over, in yet another bid to reign-in Mercedes' dominance - albeit in the name of cost control and a fear of rising speeds - a number of regulation changes have been introduced.

Among these is a freeze on numerous components including the gearbox, a number of mechanical components and impact structures, while a token system has been devised to permit a very limited number of modifications in accordance to each team's specific needs as well as a limit on engine upgrades.

Meanwhile, aero regulation changes include the simplification of the floor ahead of the rear tyres, and the diffuser, in a bid to moderate the increase of downforce between 2020 and 2021.

"On the back of the car, on the floor, the rules were changed quite a lot," je continues. "It doesn't look like much when you see the changes in geometry terms - look at the car, it won't look so different - but, actually, from an aerodynamicist's point of view, the changes at the back of the car, in front of the rear wheels, in the diffuser behind, in the forward part of the floor, those changes are actually very, very big.

"From an aerodynamicist's point of view, they sort of represent a sort of regulatory vandalism that actually knocked the performance of the car right back, about a year and a half, to somewhere around 2019 levels.

"We've had a very exciting time in the wind tunnel doing just that, finding new ways to make sure that, even with the floor chopped and hacked by regulations, we're able to put a car down on track that has high performance."