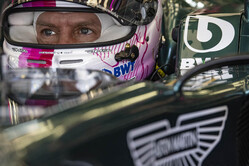 At the end of an uninspiring test for Aston Martin, Sebastian Vettel admits to being "100 laps short" of where he had hoped to be over the three days.

The re-brand and general brouhaha out of the way, once the serious business of testing got underway, much like its good friend Mercedes, Aston Martin was found wanting.

A loss of boost pressure brought Sebastian Vettel's final morning to an early close, while on Friday he lost track time due to an unspecified issue which over-spilled into teammate Lance Stroll's session.

A gearbox issue on Saturday meant the four-time world champion only completed 10 laps and failed to post a significant time... then came Sunday.

"Obviously I would have liked to just get more mileage, that's the main thing," said the German as testing came to a close. "Today was very busy and I tried to make use of the track time which I felt I did and felt was good for me. I learned a lot of things, so now it's about remembering these things and going forward.

"This is really the key," he continued. "I'm just short of mileage, we have a lot of tyre sets we didn't use just because we didn't run.

"Overall it's probably 100 laps I'm short, and something similar for Lance, we didn't both get what we wanted.

The mileage stats reveal that with 117, Vettel completed the least laps of the 20 (race) drivers on duty, while teammate Stroll completed 197, more than a race distance more.

Indeed, with 314 laps to its credit, only Mercedes (304) completed less mileage than the Silverstone-based outfit.

Nonetheless, Vettel insists that the team's fairly lacklustre start to the season is no reason to panic, though over the years it has been a regular trait of the team to play catch-up.

"I'm not too preoccupied," said Vettel, "maybe it is the age, maybe the experience. Probably ten years ago I would slightly panic, but then again if I were to panic now would it help? Probably not.

"I think it is about remaining calm, doing one thing at a time and moving forward when it's time to."