Williams to use augmented reality for car launch 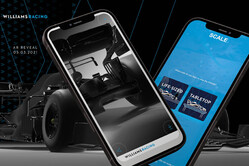 Williams will use augmented reality to unveil its 2021 challenger, the FW43B, on Friday.

The car will be revealed on at 14:00 (GMT) with fans across the world able to get their first look at the new livery using a dedicated app that projects a full-sized 3D model of the FW43B into their homes.

On the day of the launch, those that have downloaded the app will receive a push notification as soon as content is available.

Other than Ferrari, which reveals its 2021 car next Wednesday (10th), Williams is the last team to launch.

George Russell and Nicholas Latifi have both been retained, as has development driver Jaimie Chadwick.

2021 is the first season for the team under its new ownership, the Williams family having severed ties with the Grove outfit last year after 43 years at the helm.

Having finished at the bottom of the standings for the third successive season last year, the team will be hard-pressed to improve on this this time around.