"Nothing mysterious" about RB16B, insists Marko 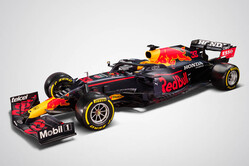 Helmut Marko has played down speculation that Red Bull has a surprise up its sleeve in terms of its 2021 contender, the RB16B.

Other than two renders, fans, the media and rivals have little to go on in terms of Red Bull's 2021 challenger, the RB16B, which was 'revealed' a week ago today.

While the Austrian team issued pictures of Max Verstappen and Sergio Perez in action at the team's filming day at Silverstone, the shots featured the pair at the wheel of the RB15 not the 2021 car.

Consequently, there has been much speculation as to why Red Bull has been less than forthcoming, with some wondering if the Milton Keynes-based outfit has a technical or aero surprise in store or is merely holding back signs of a new title sponsor.

Among the few differences to the 2020 car spotted in last week's renders are a re-profiled sidepod and changes to the rear suspension, while the floor and bargeboard reflect this year's (aero) regulation changes.

'Nothing to see here', insists Helmut Marko, who says there is "nothing mysterious" about the car.

"Time was a bit tight to do photoshoot," he tells F1-Insider.com. "Driving was more important to us than taking photos.

"We have nothing mysterious on the car," he insists. "No six wheels, no fan in the rear either," he jokes, referring to some of the more novel ideas tried over the years with varying success.

"The car is a consistent further development of last year's model," he adds. "The goal is to be able to compete for victories right from the start.

"At the first tests in Bahrain we will run all the parts on the car that will also be used at the season debut.

"We know fuel quantities and engine settings are played with during the tests. Therefore, the true potential will only be seen at the first race."