Williams shakes down the FW43B 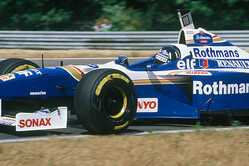 Once again, Silverstone reverberated to the sound of F1 on Wednesday as Williams took advantage of the filming day rule to shake down its 2021 contender.

Tuesday saw McLaren run the MCL35M, with Lando Norris and Daniel Ricciardo both getting their first taste of the Woking outfit's 2021 contender.

On Wednesday it was the turn of the team's (once) great rival, Williams, who had George Russell and Nicholas Latifi on duty.

The Grove outfit, which is under entirely new ownership and management since it shook down its 2020 contender a year ago, will reveal the car on 5 March, exactly one week before pre-season testing gets underway in Bahrain.

While it is claimed that some teams will carry over around 60 - 70% of last year's cars, Haas has already admitted that other than adapting to the regulation changes its 2021 version is virtually the same.

Sadly, the unimaginatively named FW43B appears to have gone down the same route.

While some websites have cheekily used pictures of the 2020 car, 'suggesting' that they have a scoop on this year's version, Pitpass has gone one better, instead opting for a shot of the 1996 FW18, a glorious reminder of altogether better days for the once mighty Grove outfit.