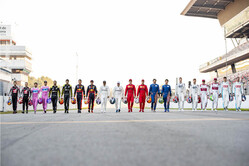 In a bid to further limit team spending, a working group is to be set up to look into the possibility of a salary cap for drivers and leading staff.

Though F1 finally introduces a budget cap this season, many feel that one of the most important aspects of team spending - as fans of fantasy F1 games will attest – has been overlooked, that of driver salaries.

For while the overall team budget cap is $145m this year - reducing to $135m by 2023 - the salaries of drivers and a number of 'leading' personnel are exempt.

Finally getting the teams to accept a budget cap was one thing, but the idea of limiting what they can pay their drivers and top staff quite another, and, understandably, a number of the drivers themselves are not happy.

Indeed, it is believed that Lewis Hamilton's one-year deal with Mercedes is worth around Ł40m - at $55m, more than a third of the 2021 limit his team is allowed to spend on its race programme.

One of the things to come out of yesterday's meeting of the F1 Commission is the news that a working group is being set up to investigate the possibility of introducing a cap on salaries.

"As 2021 sees the introduction of a cost cap for the first time in Formula 1, various topics around controlling costs and how this overall objective can be achieved over the coming years were tabled during the meeting," read yesterday's official statement following the meeting of the F1 Commission.

"As part of this, a working group will be created – including the drivers themselves – to discuss the topic of driver and senior team management contracts."

Oh to be a fly on the wall for that one... could make the infamous Handforth Parish Council Zoom meeting look like a tea party.