Portimao gets green light for 2 May 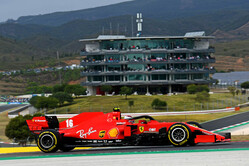 F1 bosses have agreed a deal with Portimao that means the Portuguese circuit will host the third round of the season.

The date was initially for the inaugural race in Vietnam, but following 'issues' with the event's promoter F1 bosses reserved the date as they sought a replacement.

With a deal having been agreed with officials at Portimao, the teams will be officially informed of the decision at tomorrow's meeting of the F1 Commission.

The decision to race at Portimao, which proved popular with drivers and fans alike last year, comes at a time the country is on the official 'red list' of (currently) 33 countries regarded as "high risk" and from where arrivals - certainly in the UK - will be forced to quarantine for 10 days.

Unlike last year, F1 is not regarded as an 'elite' and consequently any F1 personnel returning from Portugal would be forced to quarantine, a major issue when one considers that seven of the ten teams are based in the UK.

However, with the Spanish Grand Prix taking place just one week later most personnel would have remained on the Iberian peninsula anyway.

It is understood that the inclusion of the Portuguese round means that there will not be a second event in Bahrain and that following the 28 March race the 'circus' will head to Imola.

However, with the continued uncertainty over the virus and the increasing threat of further travel restrictions, beyond those opening three races F1 bosses are totally in the dark as to what happens next.

Indeed, while Bahrain isn't on the 'red list' nearby Abu Dhabi, and the rest of the United Arab Emirates is.

With F1 due to announce its third-quarter figures later this month, the deal with Portimao, which is more likely to involve the sport paying to use the facility than circuit bosses paying the sport a hosting fee, is a clear sign of the continued desperation to put together a feasible schedule. While Stefano Domenicali continues to insist that a 23-date schedule is possible, the Italian must surely be regretting Chase Carey's folly in announcing such an impossible schedule in the first place.