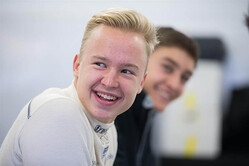 Citing drivers Lewis Hamilton and Nikita Mazepin - albeit for entirely different reasons - F1 boss, Stefan Domenicali says that drivers should be role models for the sport.

While the seven-time world champion is known well beyond the race track limits for his activism on a whole host of issues, Mazepin made the headlines late last year before even making his F1 race debut.

The Russian, who has already garnered a somewhat unfavourable reputation for his actions on and off track, posted a video on social media which showed him apparently groping a young woman.

Following an outcry on social media, Haas launched an investigation into the incident which it and F1 described as abhorrent, however, to the disappointment of those who had launched the #WeSayNoToMazepin hashtag on Twitter, the American team subsequently said the mater had been "dealt with internally" and "no further comment" would be made.

Using both men as an example, Stefano Domenicali told members of the media that drivers must be role models for the sport.

"He has given F1 a different dimension that is beyond the sport," he continued. "He is a massive ambassador for F1. He is also an ambassador for other values and issues that are really relevant.

"Lewis is really very important to F1 because he is embracing other values and bringing them into the discussion, and putting his face to issues out of the normal sport."

Referring to Mazepin, he said: "I would say that it was pretty clear what Mazepin did was not acceptable. We need to make sure that in the discussions that we will have that they understand we cannot joke about certain things. It's not possible.

"We cannot lose the opportunity in making sure they understand they are more than drivers, they have a big responsibility because they are the face of our sport," he continued. "They have to understand that their behaviour and their words and a lead-by-example approach is what I am expecting to share with them.

"I want to share how I believe we should work together also in using our platform and their role model to push for issues that are important for our society. They are too important not to understand they are role models that they have to embrace."

The Italian also voiced his hope that Hamilton will soon sign on the dotted line for Mercedes.

"I really hope that we can have this announcement soon because what he's going to fight for this year is something that from a sporting perspective is incredible. I can imagine the pressure and the dynamic on how he wants to reach this new record because that would be an incredible story to tell."