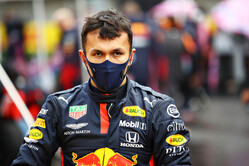 Despite being dropped by Red Bull, Alex Albon insists that his F1 career is not over, making clear that he's "not giving up".

When Red Bull finally confirmed what was already being widely reported after the energy drink manufacturer's publication Speedweek leaked the F1 team's decision, Alex Albon was seemingly one of the last to know, having been informed just a couple of hours earlier.

For weeks, team boss Christian Horner and Red Bull's motorsport consultant, Helmut Marko had warned that the seat was the youngster's to lose, and lose it he did.

While there were a number of strong performances over the course of the year, the stark reality is that Albon is the only driver to have been out-qualified by his teammate at all 17 races, while scoring less than half the points (105) than his teammate Max Verstappen (214).

Furthermore, while in arguably the second best car on the grid, Albon could only finish 7th in the standings, while Verstappen was third, only 9 points adrift of Valtteri Bottas. But that's another story.

At the weekend, Albon, who will be the team's reserve driver next season, mainly concentrating on simulator work and development for 2022, finally broke cover.

"I want to say a huge thank you to all of you that supported me throughout this year, especially my Thai fans," he said on social media.

"With all the different opinions out there, I always had you guys to push me through it.

"I'm not giving up," he insisted, "I've poured my life into this and I won't let it stop here. I have more to give and my focus is getting back for 2022 and to wave the Thai flag again."

While close friend George Russell tweeted his support, accompanying a picture of the pair together with the comment, “You’ll be back mate”, there was little sympathy from Albon's former teammate.

Asked what he believes Sergio Perez will bring to the team, the Dutchman said: "It's more that we'll have a second car which is capable of being up there as well the whole race and trying to put a bit of pressure on.

"For example, like in Abu Dhabi, at the end, Alex was quite close," he continued. "Most of the time, Mercedes try to go for an extra stop or whatever, and then I'm in more difficulties, because most of the time when we were quite competitive this year, I was the only car trying to beat them, and tried to do something different.

"But they can always do the right strategy with one of them, because they will always cover me with one car, so it was always a bit difficult to fight them.

"I just hope that Checo will be the one to first of all push the whole team forward, but also keep me on my toes, which is always nice. To have a teammate pushing you, it's exciting."