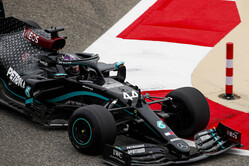 On Friday the teams will get the chance to once again run Pirelli's 2021-specification tyres, as was previously the case in FP1 and FP2 in Bahrain.

The tyres were also tested during FP2 in Portimao in October, and subsequently homologated by the FIA on November 1.

In Abu Dhabi, the teams will have one set of 2021 C4 compound per car to try out during FP2 only for a minimum of eight timed laps (as opposed to Bahrain, where there were two sets per car of the 2021 C3 compound).

The aim of the test is to allow teams and drivers to gather data that will be useful for next season, the new specification having been developed to suit the continued evolution of the current cars and the expected loads on them next year.

Pirelli has left the teams free to define their own run plans in order to collect the information that will be most useful to them, but has suggested using reduced pressures: 21.5 psi at the front and 19.5 psi at the back (1.5 psi and 0.5 psi lower respectively than the 2020 specification).

Pirelli has also suggested modifying the car set-up to allow the new structure to work at its best and compensate for any effects such as understeer.

The Italian manufacturer came in for a lot of criticism following the Bahrain test, with Lewis Hamilton, in particular, hitting out at the proposed compounds, arguing that if after all this time Pirelli cannot get it right it should drop the new compounds and stick with the 2020 tyres, which are essentially what was used in 2019 also.

The world champion also suggested that the return of the 'tyre war' would spice things up.

Pirelli argued that the issues the drivers encountered was because the tyres were being tested with 2020 set-ups and loads when they had been constructed with 2021 purely in mind.

"I believe the biggest mistake was not to give them the right information on which was the target of the test," said Mario Isola, when asked about the comments last weekend.

"Obviously, we are trying to fine-tune the current construction in order to cope with the additional loads of the cars in the future," he continued. "We decided together to work in two directions: one was on the technical side to reduce the downforce for next year; on the other side to improve the current construction in order to have more resistance to integrity. That is what we did.

"Consider that we tested only 30 minutes in Portimao. We found a specification that gave us feedback in line with the current tyre but with an resistance to integrity that is a step better, so we decided to homologate it.

"I think that we have now clarified which is the target of the test, which is the programme for next year, we can test them again in the C4 compound in Abu Dhabi with a different approach, in a different way."