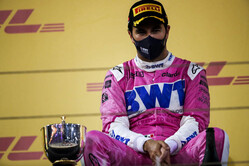 Racing Point's Sergio Perez claimed his first win, using all three compounds at a dramatic Sakhir Grand Prix. Perez made his first stop on lap one, moving from the Red soft to the Yellow medium, and then completed a shorter final stint on the White hard tyre.

Mercedes was affected by a misunderstanding under a safety car period while pitting their cars from first and second. George Russell had to immediately pit again after the wrong front tyres were fitted to his car, while Valtteri Bottas had a long stop that resulted in his original set of hard tyres being fitted again. Russell then had to pit for the fourth time with nine laps to go due to a left-rear puncture.

A safety car after the start had the effect of slowing down the pace at a crucial point in the race, with the cars full of fuel. This lengthened the pit stop window and also played into the hands of the soft tyre runners. Perez, who was involved in a crash on the first lap, was the only driver to pit under the first lap safety car, while his team mate Lance Stroll completed the longest opening stint (42 laps) on the soft tyres.

Track temperatures were a relatively cool 23 degrees centigrade at the start of the race, with gusting winds that blew sand onto the track from the surrounding desert, affecting grip.

There was a wide variety of one-stop, two and three-stop strategies seen in the race. Renault's Esteban Ocon and Racing Point's Lance Stroll were the only two drivers to stop just once.

Mario Isola: "A third safety car period turned the race on its head by lap 62, with some confusion in the pitlane that affected Mercedes, which had been running first and second up to that point. The cool conditions probably reduced the degradation of all the compounds, especially the soft C4, resulting in an extended opening stint and making a one-stopper possible: especially for those starting on the medium tyre. However, a two-stopper was also very effective, as Sergio Perez - who had only one set of medium tyres and one set of hard tyres available - demonstrated by using all three compounds to claim a spectacular win; having been right at the back after his first stop. With the strategy influenced heavily by safety cars, we were treated to a spectacular 20-lap sprint race at the finish, on the shortest lap seen this year.

"Congratulations also to Mick Schumacher for winning the Formula 2 title and keeping up the tradition of F2 champions graduating directly to Formula 1. F2 has proved to be an excellent preparation ground for the top category, and this includes tyre management. We've often seen thrilling and hard-fought races, as was also the case today. We were also delighted to present the F2 Driver of the Year award to Yuki Tsunoda, as voted for by media, and a scholarship cheque for €300,000 towards an F2 drive next year to F3 champion Oscar Piastri, in a ceremony after the race."