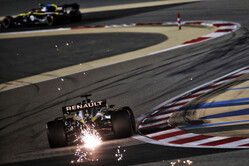 Renault DP World F1 Team were left with a tinge of disappointment from qualifying for tomorrow's Sakhir Grand Prix with Daniel Ricciardo seventh and Esteban Ocon eleventh in an exceptionally tight session at the Bahrain International Circuit.

There was a sense of optimism heading into qualifying after a positive showing in Friday practice and today's Free Practice 3 with both drivers in and around the top five on the timesheets.

Nevertheless, Daniel's Q3 lap puts him well inside the top 10 for the tenth consecutive race, while Esteban will take a free choice of tyre for tomorrow, which could provide some options on strategy.

For Q2, both drivers attempted an initial run on Medium tyres but that left them on the cusp of reaching Q3. For the second run, Soft tyres were fitted to both cars with Daniel's effort putting him ninth with Esteban eleventh.

Daniel's first Q3 lap on new Softs placed him sixth but he had to settle for seventh in the end after others found improvements on their second, new Soft tyre runs.

Daniel Ricciardo: "I'm a little bit frustrated with the result because I definitely felt the car could have finished inside the top five. We had a good final practice session this afternoon and then come qualifying we got through to Q2 with both cars looking strong. But my lap in Q2 wasn't great as I hit the kerb in the last corner and my two laps in Q3 weren't that strong either. We'll take a look at it tonight to see what happened. Despite the frustrations, I do think we can make some moves tomorrow and get some decent points from both cars."

Esteban Ocon: "It was very tight in qualifying and I'm a bit disappointed with the result given how well we've been performing at times this weekend. The car was good yesterday, but there has been less performance at some moments, and we have a few things to understand there. The positive is we have a free choice of tyres for tomorrow and, in a race where strategy will be difficult, that could be interesting. It's not about where you start, but about where you finish, so we'll give our all tomorrow. It'll be a long race like last weekend, so we have a bit of hope for a good result."

Alan Permane, Sporting Director: "It's fair to say we're a little bit disappointed with today's running after a decent day yesterday and good preparation for qualifying. We were hoping to get both cars higher up on the grid than seventh and eleventh. All is not lost, of course, and it's a very long race tomorrow and Esteban, starting eleventh will have a free tyre choice and we will do our best to exploit that. We look forward to scoring good points with both cars."