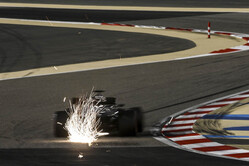 The shortest timed lap in Formula 1 history - less than 55 seconds - was set in FP1 at the Sakhir Grand Prix by George Russell on the P Zero Red soft tyre. On his debut for Mercedes, the Englishman also went fastest in FP2, again on the soft. Russell was one of three new driver and car combinations taking part this weekend, along with Pietro Fittipaldi (Haas) and Jack Aitken (Williams).

The lap times in FP2 were generally slightly slower than in FP1, due to track limits being enforced in Turn 8.

With the shortest lap of the year bar Monaco, this was also among the closest tyre gaps in terms of performance. There's around 0.4 seconds between soft and P Zero Yellow medium so far, with approximately 0.3 seconds between medium and P Zero White hard.

While there's less energy going through the tyres on the Bahrain Sakhir lap compared to the full grand prix circuit, two stops still seems to be the most likely option for the race on this abrasive surface.

Mario Isola: "With such a short lap here and the field bunched up, the margins are more closely balanced: including the performance gap between the tyres. As this is effectively a brand new venue, it was important for teams to gather as much data as possible to compare the performance of all three compounds and formulate the optimal strategy. We've seen less degradation so far than we did at the previous round in Bahrain last weekend. As a result, the soft C4 tyre can be used more extensively than it was a week ago on the longer circuit. In Formula 2, the drivers got used to a brand new tyre nomination, with the soft tyre chosen for this weekend alongside the hard. This makes for a notable speed and durability discrepancy, which will heavily influence the race strategy. We've seen today that traffic on the short lap is definitely an issue, and that's sure to influence Formula 1 qualifying tomorrow."