Bottas: If he beats me it won't look good 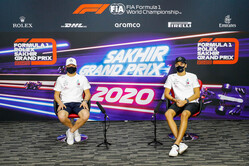 Heading into the penultimate race weekend of the year, it is ironic to hear both Valtteri Bottas and George Russell insist that they are not facing any undue pressure.

While the Briton has to attempt to fill the mighty boots of a seven-time world champion, the Finn has to stake his claim as the de facto number one in Hamilton's absence.

All things considered however, Bottas is under the most pressure, for if Russell should beat him it would not be a good look.

Asked how it might impact his career should he be beaten this weekend, the Finn was clearly taken aback.

"I don't really know what to say to that question," he eventually admitted, "I haven't really thought about it in that sense.

"If I have to give some kind of answer, I would say if he beats me, for sure, it wouldn't look so good for me if I had a normal race and he beats me fair and square.

"Obviously, I will try to avoid that," he continued. "But I'm not a person that thinks things that way, from that side of things. I try to turn things into a motivation and into a positive thing, and that's my mind-set for this weekend."

The Finn has won 2 races to Hamilton's 11 this season, and been out-qualified no less than 11 times.

While he has suffered a number of issues over the course of the season, including a DNF at the Nurburgring, he has amassed 201 points to his teammate's 332.

"I know the media likes to speculate on things and create drama, showdowns," said Bottas, "but I doubt George thinks that way, at least I don't. I think it's a great opportunity for George, a great opportunity to learn a lot and to show what he can do with the team.

"From my side, as a racing driver, of course you always want to be ahead of your team mate, whether it's Lewis Hamilton or George Russell or anyone else, it doesn't matter.

"I have a job to do as well, for the last two races of the season, I have my own motivations, which is trying to win the remaining races, that's, obviously, the only goal, and try to maximize all the learnings I can for next year to end the season on a positive way.