We still have a chance, insists Ricciardo 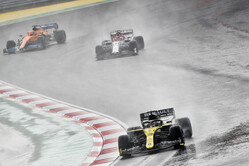 If ever the term 'rollercoaster' applied, it is to Renault's recent run of form. While there were podiums for Daniel Ricciardo at the Nurburgring and Imola, in Portugal the Australian and his teammate, Esteban Ocon could only manage six points between them, while last weekend's race netted just one.

Consequently, the French team slipped from third to fifth in the standings, while a strong result for Ferrari saw the Italian team close to within 6 points of its French rival.

Though Ricciardo has netted 33 points from the last four races, teammate Ocon has just 4 to his credit, retiring from the Nurburgring race with a hydraulics issue and the Imola event with a problematic clutch.

Nonetheless, Ricciardo is confident the team can get its act together and take the fight to McLaren and Racing Point as the battle for third is covered by 24 points with three races remaining.

"For sure now we are the underdog but it is still doable," said the Australian. "There are still three races, if there was only one race left or even two I would be more pessimistic. But we can still do it.

"It is a shame that there was a big swing," he added, referring to Sunday's race. "It does sting, we cannot deny that. But with three races to go we still have a chance to pull it off.

"Although the races will be dry there will still be a bit going on. Bahrain is a tight Turn 1, and maybe Sergio and Lance want to get into each other! We will see!"

Referring to his own race in Istanbul, which saw him clash with Ocon at the start, he said: "The start was really good but I had come out of it because I had nowhere to go. Then Esteban had a nice run because of it on the outside, and Lewis had a nice run on the inside and I was a little bit of a sandwich.

"It was a bit of a shame for sure, but then there were moments in the race where we had a bit of pace but just not consistently. That was the biggest thing.

"There was a moment when Carol, my engineer, said you're one of the quickest on track, and then two laps later the tyre completely died. So we did not have sustainable race pace to fight anybody."