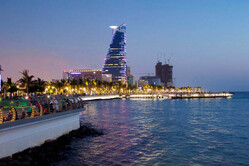 In the eyes of many, the use of 'racing', ''street circuit' and 'Tilke' when describing the proposed track in Jeddah would probably be seen as the mother of all oxymorons.

However, the man in charge of Saudi Arabia's first Formula One Grand Prix, Prince Khalid Bin Sultan Al Faisal, president of the Saudi Arabian motorsport federation, insists that track designer, Hermann Tilke, will be charged with putting racing first and foremost when creating the country's F1 track in Jeddah.

"Our goal is to make it an exciting and thrilling race," Prince Khalid told reporters. "We don't want it to be one of those boring races where there is no overtaking.

"For us, we are hosting F1 because we want to bring the excitement," her continued. "And what I can tell you is we're doing our best to make it an exciting race.

"It's not only about the scenery or the environment or the sporting events that we're planning to do," he added. "For us, it's racing. So it needs to be exciting. It needs to be fast. If you see the Corniche, you are going to have an idea that it's not going to be a slow race. Our goal is to make it exciting and thrilling, with a lot of overtaking."

Tilke will be assisted by F1 itself, which is to provide software aimed at providing the configurations that will best lend themselves to good racing.

"We love seeing the event in Monaco. It's a lovely event," said Prince Khalid . "But in terms of racing, there's no overtaking. It's not that exciting. So for us, we want to create a street race where it looks nice, where the event and the environment is nice, but at the same time, it is a thrilling race.

"We don't want it to be just another race. We wanted to do something special," he insisted. "We want it to be a different race, we want it to be the best race. So working closely with Formula 1, and Tilke, I can promise you it's going to stand out."

"I know, I don't blame them," said Price Khalid, when asked about the reaction to the event's announcement, which witnessed much negativity on social media. "When you don't know a country and when you have a certain image of a country... I remember myself when my parents used to tell me we were going to go to the US, especially to New York, I was frightened, I was thinking that I was going to walk the streets and somebody is going to come and shoot me, because I'd never been there.

"So I know why they're not excited about it, because of a lot of issues with the human rights, because they've never been to Saudi.

"That's why now for us opening up and hopefully people coming to Saudi Arabia and seeing the country and then going back and reporting what they saw, maybe this will make people change their mind and come.

"One of these issues, why we had this bad image, it was because we were closed," he admitted. "Our country is closed. So part of the vision and part of opening up our country is we would like people to come and see who we really are.

"We don't have anything to hide," he insisted. "If we want to 'sportwash' our image or something, we would close our country because we would not let you come and see and meet with our people."

Indeed, Prince Khalid says he is keen to see W Series as part of the support programme for his country's race.

"For us, over the last two years, we really are promoting women and especially women in motor sports, so it is something we would love and we would like to inspire our locals and would like to bring them these kinds of events and like to see more women racing in Saudi Arabia."