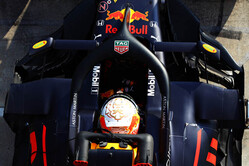 Aston Martin Red Bull Racing and Scuderia AlphaTauri both produced strong performances as the Honda-powered teams were in the top ten throughout Saturday at the Emilia Romagna Grand Prix. As part of a unique race weekend, the one and only practice session took place on Saturday morning, with 90 minutes of running for the teams to get up to speed ahead of qualifying.

At AlphaTauri's home track, the team was on the pace from the word go and we had all four Honda-powered cars in the top nine in practice with Max second, Pierre fourth, Daniil eighth and Alex ninth. When qualifying got underway, the lack of Friday running meant the track was still rubbering-in but all four drivers again safely negotiated the first part of the session to advance into Q2. There was drama at this stage though, as a spark plug needed changing on Max's car and his team pulled off a brilliant effort to complete the job in a matter of minutes and get him back out on track.

Despite being left with just one flying lap to try to advance, Max showed extreme confidence to stick with the medium tyres and pulled out a top-six lap to secure a place in Q3 and therefore to be able to start the race on the medium compound. Alex also needed another run after a spin and used the softs to progress into the final part of qualifying, ending up fourth quickest in Q2, one place behind Pierre who was having another strong session. Daniil was eighth - both AlphaTauris qualifying on softs - to ensure we had all four cars in the top ten shootout for the first time since Mexico last season. Max took the fight to Mercedes by finding a big gain with his final lap but ended up having to settle for a still excellent third on the grid, with Pierre joining him on the second row by equalling the best qualifying performance of his career.

Toyoharu Tanabe, Technical Director: "This was a busy and exciting day with the new weekend format, having to prepare for qualifying and the race in just 90 minutes. It was not an easy task but we managed it. It's nice that at their home race, Scuderia AlphaTauri had their best qualifying of the season and it was also the first time this year that all four Honda cars are in the top ten. Once again Max secured P3, despite an electrical-related issue which required a parts change in the middle of Q2. The Aston Martin Red Bull Racing mechanics and their Honda colleagues did a good job to get him out in time. Pierre's recent good form continues and he equalled his career best qualifying performance. We are looking forward to seeing two Honda powered cars on the second row tomorrow. Alex is sixth and Daniil's eighth place is his best of the year, so we can be optimistic for a good race tomorrow, aiming for four cars in the points. We will be pushing hard for the best possible result."