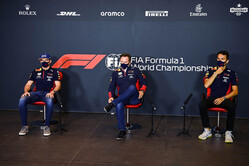 It's rare for Helmut Marko to come out in support of a struggling driver, but like Red Bull team boss, Christian Horner the Austrian appears to be genuinely rooting for Alex Albon to raise his game and keep his seat for 2021.

However, at a time the youngster had been given a couple of races in which to close the gap to Max Verstappen, in Portugal Albon not only finished a lap down on the Dutchman but outside the points also.

Needless to say, the chorus of disapproval from the pundits at Sky was matched by the 'experts' on social media, who leapt on Albon's admittedly disappointing performance with apparent glee in order to argue the case for their own preferred option for the second Red Bull seat.

"It's Alex's seat," Horner told reporters in Imola. "He's got his bum in the car and everyone wants to see him retain that seat.

"I think he has to block out the outside noise, get his head down, just have a good weekend," he added.

And blocking the outside noise is exactly what the youngster is trying to do.

"There's talk, there'll always be talk," said Albon, "but at the end of the day, I know listening to whatever has to be said doesn't change anything on-track.

"My focus is more on driving and the results more than anything else," he added. "I know that if I focus on that, all the other stuff will quiet down a bit. These things happen, but I focus on the job and that's all that matters."

Asked, if things do not work out, if he would accept demotion to the AlphaTauri seat alongside Pierre Gasly, Albon said: "No, not at all. I think it's every driver's dream to race for a top team like Red Bull, and my intention is to stay here."

With Horner and Marko having admitted that they would look outside the Red Bull driver pool if the worst came to the worst, when asked if he is already working on a Plan B, the Briton replied: "We're fully focused on Plan A and making sure that Plan A happens, so at the moment I think we will just put all our attention into that."

Asked about the issues the cat-loving Thai driver has with the RB16, Horner said: "I think that a fast car is sometimes a difficult car and of course, the way we try and generate lap times is on corner entry. And the car has had its complexities this year, more so than even last year, I would say, and so that has made life difficult.

"We're all working hard to create a more rounded package that doesn't have these peculiarities. So it's something that everybody in the team is very much focused on."