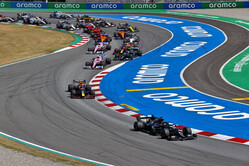 Teams have agreed in principle to the introduction of a $30m cap on drivers salaries to be introduced in 2023.

The move will follow the introduction of a $145m racing budget to be introduced next season as part of the sport's efforts to level the playing field and entice new teams.

However, in a move with which aficionados of Fantasy F1 games will be familiar, the $30m budget planned for 2023 would cover both drivers. Consequently a team could employ two drivers at $15m apiece or one at $25m and the other at $5m.

Or, as is rapidly becoming the norm, Dad buys the team and the full $30m is splashed out on the star driver.

Hard to believe but the $145 budget to be introduced next year does not include driver salaries - nor the salaries of the team's top three employees - a move which many feel makes a mockery of the whole thing.

The proposal was backed by all ten team bosses at Monday's meeting of the F1 Commission and will now go forward for ratification by the World Motor Sport Council in December.

In addition to the proposal that contracts agreed before the 2023 season are honoured, it's understood that teams spending more than the salary cap can have the shortfall set aside against their main race budget, though teams underspending the salary budget may not use the surplus for their race budget.

Earlier this year, Mercedes boss, Toto Wolff, who last weekend admitted that he will have to dig deep in order to agree a new deal with Lewis Hamilton, welcomed a salary cap but warned that it could cost F1 some of its "superstars".

"The salary cap is something that we have supported," he said. "I believe similar to the leagues in the US, if you cap the team at $145m with a downward slope, you need at a certain stage to also cap high salaries.

"We have said we don't want to lose the superstars out of this sport," he continued, "so it needs to be a gradual introduction from 2024 onwards so that the future generations of drivers end up on a more sensible level, in considering that we have a cost cap on the team.

"This is still my opinion," he made clear. "I think it would be good for the sport. They need to be inspirational, the drivers, and as you can see in the US, the top football players and the top basketball players are still very inspirational.

"I think high salaries are what they deserve, because they are global superstars and they are the best of their league. I think it should not end up in a ratio, salary of an individual compared to the team cap, that over certain time is going to create controversy that is not needed."