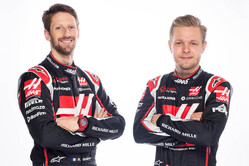 The next stop on the 2020 FIA Formula 1 World Championship takes Haas F1 Team to Italy for a third time this year, with the returning Autodromo Internazionale Enzo e Dino Ferrari in Imola set to feature a revised weekend format.

Following on from September's sojourn to Monza and Mugello the upcoming round at Imola will be the third Formula 1 World Championship to take place on Italian soil in 2020. This matches the record from 1982, when a trio of circuits in the United States - Long Beach, Detroit and Caesars Palace - were present on the schedule. Imola has not featured in the championship since 2006 and for its 2020 return it will be known as the Emilia Romagna Grand Prix, after the province in which the circuit is located. It will also be the 100th Formula 1 World Championship round to take place in Italy - the first country in the world to reach such a milestone.

It is a new venue for Haas F1 Team while drivers Romain Grosjean and Kevin Magnussen were too young to be racing in Formula 1 the last time the Autodromo Internazionale Enzo e Dino Ferrari graced the championship's schedule. Magnussen has never competed at Imola but Grosjean visited the top step of the circuit's podium when he clinched the GP2 Asia Series title with victory from pole position in 2011.

The challenge will also be enhanced by a change in the usual grand prix weekend format. Ever since Haas F1 Team joined the championship in 2016 there have been four scheduled hours of free practice prior to qualifying. But for the Emilia Romagna Grand Prix Formula 1 drivers will have just 90 minutes to get up to speed on Saturday morning, with all the on-track action condensed into two days. There was an unexpected early trial at the Nurburgring when bad weather forced the abandonment of Friday's running - and Haas F1 Team went on to score points. A repeat this weekend would be a very welcome outcome.

Imola marks Formula 1's first official two-day race weekend. You've been vocal about such a format affording the opportunity perhaps for Formula 1 to increase the number of races moving forward while others are opposed due to the strain on personnel. How does Formula 1 balance the desire for growing its platform versus the human elements involved - notably team personnel, that make up the running of the sport?
Guenther Steiner: "First of all, I want to see how Imola pans out with just the one practice session. We had it at the Nurburgring, and it didn't work out badly for anybody. I think it's doable. If we know that, then we can go in and see if we can do more races and still not overwork team personnel and so on."

Formula 1 has visited several tracks either new to Formula 1 or perhaps not utilized by the series in a long time - such as Imola. Where do you stand on the possibility of 'wild card' circuits rotating in and out of the Formula 1 calendar? Could such a format work or is calendar stability year-on-year a more pragmatic approach?
GS: "I'm all for getting something new in and spicing things up. Obviously, the financials need to work. If you just do it to spice things up, but there are no benefits, then we cannot do it - we cannot afford to do it. But otherwise, I'm fully for it that we maybe add in one or two races from a different place every year."

The flip side to visiting those venues in 2020 is that you're missing out on visiting some favored F1 tracks normally found in the latter half of the calendar. Which circuits are you missing the most from the regular F1 schedule and why?
GS: "I'm not really missing any - we did them before and we'll do them again. The only thing is, living in the United States, I'm obviously missing going to Circuit of The Americas this year - my other home race. It's a fantastic place and Austin is a fantastic city."

While the team has been candid about its lack of development on the VF-20 this season, can you detail the work that's been going on with regards to the permitted developments for 2021?
GS: "As I've said before, we had to stop development work on this year's car due to the pandemic - we didn't know what our finances would be. We started up again two months ago with adapting our car to next year's revised aero rules for the rear downforce. With that development, hopefully we make some steps for next year and make some big gains. That's what we need."

Imola marks Formula 1's first official two-day race weekend. Does it increase your anticipation and excitement, or does it add pressure knowing there's a solitary practice before qualifying?
Romain Grosjean:
"I guess it's not easy. There are a few tracks, like Barcelona, where you don't really need the Friday as you know it by heart. But Imola - well I raced there a very long time ago, so I don't really remember it that well. Saying that, the Nurburgring was kind of the same and things turned out well for us. I think it's quite exciting. It brings some unpredictability into the race - that's something Formula 1 has been generally lacking. Hopefully it will spice things up."

Formula 1 has visited several tracks either new to Formula 1 or perhaps not utilized by the series in a long time - such as Imola. Have you enjoyed the opportunity to run at some of these venues in Formula 1 this year?
RG: "Yes, very much. First, it was a very good job by Formula 1 managing to get so many races into the season, second, it was really cool to discover, or re-discover some tracks like Mugello, Nurburgring, Portimao, Imola, and I think Turkey's going to be mega. To me they are tracks that should be on the calendar. I know we cannot go to 30 races a year, but I would love to see a change from year to year in terms of the tracks Formula 1 visits. It's really cool to discover new places and see the different types of racing."

The flip side to visiting those venues in 2020 is that you're missing out on driving some favoured F1 tracks normally found in the latter half of the calendar. Which circuit are you missing the most from the regular F1 schedule and why?
RG: "Suzuka, as it's my favorite track. That's the one I'm definitely missing. I'd include Singapore, it's always quite an iconic one. Austin's a pretty good place. There are many tracks I'm disappointed we didn't get to. That's why seeing a calendar that maybe one year is more European based, the other year more newer circuits, it could be quite cool. Then you get the best of both worlds."

Imola was a happy hunting ground for you in 2011 in the GP2 Asia Series - where you scored a pole position, two fastest race laps and a win in the double-header event. What are your memories of the circuit and your thoughts heading into the weekend?
RG: "It's actually pretty fast. There were some bumps on track, I don't know if it's been resurfaced, but it was a bit bumpy. There are some cool old-style kerbs. Obviously, it's a track with a lot of history - notably with Ayrton (Senna) from 1994. You can't go there and not think about that. It's generally a pretty cool track. I'm really looking forward to discovering it with a super-fast car."

Imola marks Formula 1's first official two-day race weekend. Does it increase your anticipation and excitement, or does it add pressure knowing there's a solitary practice before qualifying?
Kevin Magnussen: "Well the Nurburgring ended up being a two-day event, obviously it wasn't intentional, but that's how it went. It made for a pretty exciting race. I'm hoping to see the same again. It does add a little more pressure to get your act together quickly, but I think that's a pretty cool thing."

Formula 1 has visited several tracks either new to Formula 1 or perhaps not utilized by the series in a long time - such as Imola. Have you enjoyed the opportunity to run at some of these venues in Formula 1 this year?
KM: "I've enjoyed it. It's been great to learn a few new tracks. I think it's thrown a few unknowns into the races, and some of the teams have struggled with strategies while some drivers have made mistakes. It's been a pretty eventful season in terms of stuff happening in the races - and there have been some pretty spectacular ones. I think it's been a positive."

The flip side to visiting those venues in 2020 is that you're missing out on driving some favored F1 tracks normally found in the latter half of the calendar. Which circuit are you missing the most from the regular F1 schedule and why?
KM: "Surely Monaco and Japan. Those two races are always a highlight of the year. Driving around those two tracks, for completely different reasons, is exceptional. Monaco is such a cool track to drive and it's such an intense weekend."

You haven't raced or tested at Imola at all in your career. What do you know about the circuit in terms of its layout and demands and how best to attack it in a modern Formula 1 car?
KM: "It's a completely new track to me. I'm going to have to get to know it quickly as we only have that one practice session. It's going to be a nice challenge. I know it's a really cool track - one that I've always watched on television in the past when I was watching Formula 1 as a young kid. I'm happy I'm finally going there."