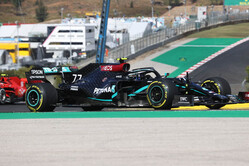 What with burning cars, drivers tripping up over one another, overly ambitious rules regarding track limits and prototype tyre testing, drivers are still struggling to get a grip on the rollercoaster that is Portimao. Literally.

Yesterday, other than the aforementioned, we witnessed a number of spins, while 125 times were deleted due to those track limits rules.

Aware that this will continue to be a problem in qualifying and the race, race director, Michael Masi has eased the track limits rules, though it remains to be seen how effective this will be.

Valtteri Bottas set the pace yesterday, ahead of Verstappen, Norris and Leclerc. Lewis Hamilton was eight quickest, and though some might already be wondering whether this is one of those tracks on which the Briton doesn't gel, let's not forget that other than being a brand new track for contemporary F1, with a brand new track surface, yesterday's running was compromised by red flags and tyre testing.

That said, the midfield looks set to be as explosive as ever, while the race should benefit from the fact that it is shaping up to be a two-stopper.

Following his FP2 BBQ, Pierre Gasly has a brand new chassis today, though it is understood he using an old engine and not a new power unit.

Sadly, a number of incidents yesterday, not least the Verstappen/Stroll clash, suggest overtaking will be difficult.

All that aside, Portimao is looking to be every bit as thrilling as we hoped it would be.

As the lights go green, Verstappen's car is up on its stand as is Russell's Williams.

Sainz leads the way, followed by Grosjean, Gasly, Kvyat and Magnussen, a mixture of all three tyre compounds.

Despite the lack of running there is no mad rush to work, with many drivers remaining stoically in their garages.

Of the few that have headed out - which is six in total - only Albon completed two install laps.

Eight minutes in and Bottas is the first of the big guns to emerge. Shortly after, teammate Hamilton follows. Both are on softs.

Yesterday, however we saw that drivers actually improved their times over a number of laps, especially on the softs.

An 18.028 sees Leclerc go third, ahead of Ricciardo, Raikkonen, Giovinazzi and Norris.

And the prize goes to Latifi, who becomes the first driver to have his time deleted, the Canadian straying into the nether regions of Turn 1.

Gasly goes third on the softs, but is demoted when Leclerc, also on softs, splits the Mercedes with a 17.410.

Early days, but the SF1000 was looing better yesterday, the Maranello outfit having brought a number of upgrades to Portugal including a new diffuser.

Ocon is warned of a slippery track surface - possibly stones on the track - at Turn 8.

Hamilton improves to 16.680 as Leclerc spins at Turn 14, ruining Bottas' lap in the process.

Gasly improves to second with a 17.047, the Frenchman congratulating his team on the "very good job" they've done with the balance.

A 17.570 sees Sainz go fifth, ahead of Bottas, Norris, Ocon, Albon and Ricciardo.

Twenty-five minutes in and Perez finally heads out.

Meanwhile, drivers continue to have their times deleted.

As Verstappen begins another flyer, Albon posts 17.179 to go third. Moments later however he is demoted when Verstappen goes top with a 16.659. At which point both Red Bull drivers have their times deleted.

Russell flat-spots his tyres when he goes cross country at Turn 5.

On fresh soft rubber, Hamilton goes quickest in S2, though he fails to improve his overall time.

While Leclerc is sixth, Vettel is currently 15th.

Bottas goes top with a 16.654, to go 0.026s clear of his teammate, who has been off and through the gravel in Turn 8 after losing the rear on entry.

"You can have one more, then we need to get on with the programme," Hamilton is told when he enquires whether he has time for more laps. The equivalent of your mother telling you that you can have ten more minutes TV before bed.

With 20 minutes remaining, and the qualifying sims coming up, Verstappen (third) is the highest placed medium runner and teammate Albon (fifth) next. Perez (eighth) is the next highest placed driver on the yellow-banded rubber.

The qualifying sims get underway, Leclerc among the first to participate. That said, the Ferrari driver aborts his lap and pits.

"DRS isn't working," reports Ricciardo as he tries the softs for the first time today.

Traffic was a problem yesterday, and is likely to be problem again today.

One by one more drivers emerge, with just seven minutes remaining.

Ricciardo is still in the pits following his DRS issue.

With 2:52 remaining, Ricciardo heads out.

Surprisingly, there are no really significant improvements - though there is still time.

At which point the session is red flagged... with Ocon stuck at the far end of the pitlane.

The TV cameras pick up on a piece of debris in the middle of the track... and then a broken drain cover on the exit of Turn 14.