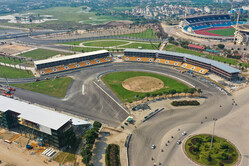 Originally scheduled for early April, the third round of the 2020 world championship, the race was one of many to be postposed as the pandemic spread globally.

While many of the other fly-away races were subsequently cancelled, organisers held out hope that the Hanoi event might still go ahead in November even though it didn't appear on the revised schedule issued in early June or the finalised schedule confirmed in August.

On the day after the season-opening Grand Prix in Austria, Hanoi chairman, Nguyen Duc Chung revealed at a city People's Council meeting that Hanoi would make "a thorough assessment of disease-related issues and will negotiate with the organizing committee so that it can organize the race at the end of November".

Today however, organisers confirmed that the 2020 running of the event is officially cancelled.

"We are unable to welcome the most exciting and prestigious motorsport series on the planet to Vietnam in 2020 due to the COVID-19 pandemic," said Ms. Le Ngoc Chi, CEO of the Vietnam Grand Prix Corporation. "This was a very difficult decision for all of us to make but ultimately it was the only solution after carefully reviewing all safety criteria as well as the efficiency under current conditions. We thank you for your support and understanding during this uncertain period."

VGPC will provide a full refund for all tickets purchased for the 2020 event. Customers who purchased their tickets directly with VGPC will be contacted via email with further information on the refund process, while those who purchased tickets via VGPC’s authorised ticketing agencies should contact the agencies directly for guidance.

To date, Vietnam has recorded 1,124 cases of the virus with 35 deaths.

In recent weeks, talk emanating from Formula One Management's London HQ suggest that bosses are lining up a full race schedule for 2021 that will resemble the traditional calendar.

"Certainly, historic European tracks are an important part of the sport, but I think you'll see a more balanced set of events across the globe on the 2021 calendar."

This year's schedule was to be the sport's busiest ever with 22 races, however the pandemic has seen this reduced to 17, with a number of circuits holding two races and a largely Europe-centric calendar seeing a couple of new additions to the schedule and the return of a number of old venues.

However, the rather large, mask-wearing elephant in the room is that as far as the pandemic is concerned there is still no light at the end of the tunnel, and if things continue as they are F1 will be hard-pressed to even put together another 17-race schedule together next year.