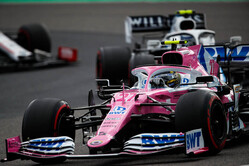 Starting from the very back of the grid, Racing Point would no doubt have been happy just to see Nico Hulkenberg not make any mistakes and possibly grab a point or two.

However, a typically spirited drive saw the German finish 8th, and thereby surely stake his claim on a 2021 seat.

Starting on new softs, Hulkenberg, along with Pierre Gasly and Lando Norris, had one of the longest opening stints, the German subsequently switching to mediums before the safety car afforded him the opportunity to switch back to the red-banded rubber.

By the end of the first lap he was up to 17th, reaching as high as ninth before his first pit stop.

Over the course of the afternoon he enjoyed a number of skirmishes, and by the afternoon had as many Top Eight finishes as countryman Sebastian Vettel, who has another race to forget.

"It has been a fun race," said Hulkenberg at the end of his day's work, The German, along with Lewis Hamilton, having completed every lap of every race he has started.

"It was difficult to expect very much from this race with so little preparation," he continued. "The other guys, they're in their season, they're in the car, and then here I am being thrown into the ice bath trying to swim and survive somehow.

"I feel quite happy and relieved that I managed this kind of performance," he grinned. "Halfway through the first stint, things were falling into place, getting into the groove and into a good rhythm with the car. I think that was and key to pull off the rest of the strategy, and stay out of trouble.

"We obviously had a bit of help along the way from some people dropping out," he admitted. "But still nevertheless, a good strategy and a solid drive."

Asked if leaping into the cockpit at such short notice on such a demanding circuit had taken its toll, he said: "I'm feeling it now. It's a very bumpy track and I'm a bit sore because it was mentally and physically demanding out there.

"But I'm very happy with the result and it was great to play a part in the team moving up into P3 in the Constructors' Championship.

"Obviously, there's still a long way to go in the season, but I wish the team all the best in the coming races."