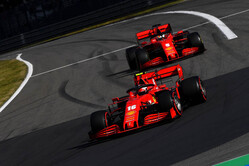 Scuderia Ferrari leaves Germany's Nurburgring circuit with a seven and eleventh place in the maiden Eifel Grand Prix, courtesy of Charles Leclerc and Sebastian Vettel respectively. The SF1000 was not as competitive in the race as it had been in qualifying, especially with Charles who was soon struggling on the Soft tyres, so that he came in to get rid of them on lap 10.

The early tyre change meant Leclerc was now on a two stop race, during which he pulled off several impressive passing moves on his way back up to sixth place. But with 15 laps remaining, the Safety Car came out after Lando Norris had to park his McLaren at the side of the track. That penalised the Monegasque who had no more fresh tyres and therefore decided to stay out on track, but at the restart, he had to give best to Pierre Gasly in the AlphaTauri to finish the race in seventh spot.

With a free choice of tyres, Vettel opted for Mediums at the start, after which he lost one place to a hard charging Antonio Giovinazzi in the Alfa Romeo. As Vettel then tried to pass the Italian, he lost control at turn 1 and had to pit having flat-spotted his tyres too badly to continue. He took on Hards on his SF1000, but they would not go the distance and so he came in for a final set of new Softs, which allowed him to fight, most notably with Kevin Magnussen, but he was unable to get into the points, having to settle for eleventh behind the aforementioned Giovinazzi.

Lewis Hamilton won the race, thus equalling Michael Schumacher's record of 91 GP victories. 72 of the German's wins were obtained with the Scuderia, the other 19 with Benetton. To mark the occasion, Michael's son Mick presented the Englishman with one of his father's crash helmets. The Ferrari Driver Academy student was due to make his Formula 1 weekend debut here at the Nurburgring at the wheel of an Alfa Romeo Racing car in the first free practice session, which was cancelled because of rain.

Charles Leclerc: "Seventh is the best we could do today. On the soft tyres at the beginning we struggled massively, which compromised our race. We had a lot of graining so we were very slow and lost several positions. So we went for a two-stop strategy, which I believe was the right thing to do.

"On the medium tyre it went quite well and we did some good overtaking which is always fun. It was very tricky after the safety car period towards the end of the race, because I had to do the re-start on old tyres and it was very cold, but I think we managed pretty well. I am happy with the overall improvement we have seen in recent weeks. We are not yet where we want to be, but every small step is going in the right direction and this is what we need."

Sebastian Vettel: "I would have liked to bring home some points, but generally, I was struggling too much with the tyres. I think the start wasn't bad. I was on the Medium compound and only lost one place to Giovinazzi in the Alfa Romeo. However once my tyres were in the right temperature window I was stuck behind him and I was struggling a lot to pass him. I probably took too much of a risk and damaged my tyres. I was obliged to pit and after that it was very difficult to fight back.

"With the Safety Car at the end we thought there was a chance for points, we fought with Magnussen and I also tried to pass Giovinazzi. In the end we just weren't able to pick up the last point. It was a very difficult day."

Mattia Binotto, Team Principal: It was a tough race today, mainly down to getting the tyre temperatures into the right operating window. That was particularly the case with Charles who, after a good start, began to suffer with graining on the Softs, right from the first few laps, which meant he was unable to push as hard as he would have liked. We therefore had to pit him earlier than planned, immediately switching him to another strategy. Then, in the closing stages, when it would have been possible to pit under the Safety Car, we took the joint decision to leave him out on the Mediums, given what we had seen in the early stages of the race.

"As for Sebastian, the spin early on compromised his race and from then on, there was little to be done, even in the final laps when he was running the Softs.

"Of course, we are not satisfied with this result, but we continue to work on improving our overall performance level. We saw signs of progress in qualifying, but the important thing is that the updates we are introducing seem to be going in the right direction, especially looking ahead to 2021. In the light of this, we should also have a few updates for the next race in Portimao."