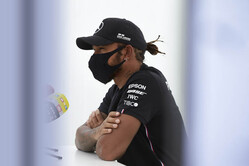 As previously reported, in reaction to the news that Chase Carey is lobbying the Governor of Rio de Janeiro, calling on him to issue the requisite licences that would allow for the construction of a circuit at Deodoro, a project that would involve the razing of much of one of the city's last remaining forests, there has been an outcry on social media against the plans.

Indeed, using the #BrazilSaysNoToDeforestation hashtag, fans have called on Lewis Hamilton to speak out, and today, on arrival at the Nurburgring, the world champion did just that.

"My personal opinion is that the world doesn't need a new circuit," he told reporters. "I think there's plenty of circuits in the world that are great.

"I love Interlagos," he added, referring to the Sao Paulo circuit whose contract ends this year.

"I have been to Rio, and it's a beautiful, beautiful place," he continued. "I don't know all the details of it," he added, referring to the proposed track, "I heard that it's potentially going to be sustainable. But the most sustainable thing you can do is not tear down any trees, particularly in a time where we're fighting a pandemic, and there continues to be a global crisis around the world.

"I don't think with deforestation and everything, I don't think it's a smart move. I don't have the details of why, but it's not something I personally support."

Other than the fact that it is not within the governor's remit to issue the licences Carey is calling for, there remain serious doubts as to whether the proposed promoter, Rio Motorsports, has the funding to build the track, far less pay the hefty race fees.