"I failed with Ferrari," admits Vettel 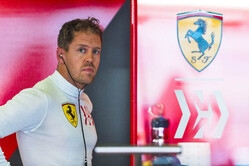 Not that long ago, much of the British media was predicting a "dream move" from Mercedes to Ferrari for Lewis Hamilton.

As the Italian marque seeks to hold on to sixth in the standings, Sebastian Vettel, who next year joins Aston Martin, admits that his "dream move" to Ferrari simply didn't work out.

"I don't think I will go on having any regrets looking back," he tells the official F1 website's Beyond the Grid podcast. "It is true that I have failed because I set myself the mission of the target to win the world championship with Ferrari, I failed, I didn't manage to do that.

"I'm generally not talking about stuff that happens on the track now, losing the car in Hockenheim in sort of half-wet, half-dry conditions," he continues. "Many people point that one out as a low point, but I'm not talking about things like that.

"I think that looking back they weren't worth fighting. You see what I mean?

"But again part of it was probably in my nature and it was natural to do so, and I think I had a point as well in some of these little fights and battles, whatever, but yeah I think ultimately that's how you mature and how you learn."

Looking ahead to the next phase in his career, he says of the move to Aston Martin: "(There were) a lot of factors. Those boxes were quite easy to tick in terms of the performance - the racing side of things, where the team is, where the might team might be, the potential and so on.

"But more so I think it was the mind-set and the will to really do something and bring something good together. It sounds like a fun project and ultimately something I want to be part of.

"It is very different to Ferrari, obviously Racing Point as it stands today and in the future Aston Martin will be growing, there will be a lot of things happening for the first time and I think it's an incredible challenging journey for the whole team, and me joining... I hope I can contribute a lot of things and do good in the car, and outside the car.