"Ridiculous" that Leclerc didn't get a penalty, says Stroll 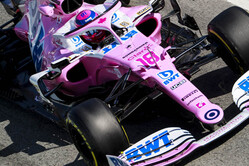 Already on the back foot going into Sunday's race after his engine overheated whilst waiting for Q2 to resume after being red-flagged following Sebastian Vettel's crash, Lance Stroll still had hopes of another decent points haul come Sunday.

Unfortunately, an early clash with Vettel's teammate, Charles Leclerc saw the Canadian out of the race before it had barely begun.

Speaking afterwards, Stroll admitted surprise that - on a day the stewards were seemingly handing out penalties left, right and centre - Leclerc went unpunished.

"I'm quite surprised that he didn't get a penalty," said the Canadian. "I gave him plenty of room, I did the whole corner on the outside and he just tagged my right rear.

"I mean, I gave him all the room I could. It was unlucky but he could've avoided it, he didn't have to run so wide into me.

"So yeah, it's kind of ridiculous that he didn't get a penalty."

Asked what he thought was achievable had he not been punted off, he said: "I think a lot was possible, I think we were seventh at that point. I had a great start. We were on a good tyre, so it's a real shame."