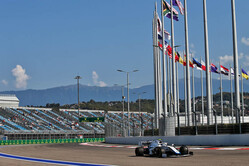 Dave Robson, Head of Vehicle Performance: Grip level this morning was quite low, which caught Nicholas out on his second run. The car was quite badly damaged considering that the incident was fairly innocuous. Fortunately, we were able to repair or replace all the damaged components and although Nicholas lost the opening 20min of FP2, his car was back to full race specification. He was quickly back up to speed and was able to complete some good running at both low and high fuel during the afternoon. He was very happy with the car, which bodes well for the rest of the weekend.

Both drivers did a good job this afternoon allowing us to explore all three tyre compounds. There is a lot to go through overnight, but if we can get the set-up and tyre preparation correct then we are hopeful of challenging for a place in Q2. At a circuit at which we expected to find it a little tricky, this would be a good result and would set us up for another decent race. No matter where we qualify tomorrow, it is such a long way from the grid to Turn 2 that the order can change quite a lot anyway.

Nicholas Latifi: I overstepped the limit in FP1. The track was very green, very dusty, which is kind of a characteristic of this track for the first session. I was the one that went off the fastest and had the biggest shunt sadly. It is just unfortunate as it left my boys a lot of work to do to get the car back out there. They did a great job and we were still able to complete most of the FP2 programme, so a big thanks to them. FP2 felt much better and even with the missed track time I felt comfortable with the car. The qualifying simulations and the race runs looked promising which has given us some interesting data to look over going into tomorrow.

George Russell: Today we were trying out some different things on the car to see how the tyres would react, as that is something that we need to work on to get some more pace on race day. We were therefore looking at how much our qualifying performance would be compromised in order to help us more on Sunday. We don't know the outcome yet but as it's a very long run into turn two, it's potentially less important where you qualify at this circuit as so much can happen going into that first corner and the tyre behaviour is often a bit unpredictable.