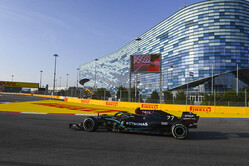 With the Sochi circuit not having been used for some time and no Formula 3 this weekend, it was extremely 'green' and slippery surface with a high degree of track evolution and variable winds. As a result, the drivers struggled for grip.

The high track evolution meant that the times improved during the warm conditions of the afternoon, with Mercedes driver Valtteri Bottas going fastest in both sessions, using the P Zero Red soft tyre on each occasion (the C5 - which is the softest in the entire Pirelli F1 range). The nomination for Russia this year is one step softer than the tyres chosen for 2019.

Renault driver Daniel Ricciardo showed strong performance in both sessions on the soft tyre, finishing second in FP1 and third in FP2.

From the data gained so far, Mercedes (which has won the Russian Grand Prix since it was inaugurated in 2014) appears to have a considerable pace advantage, which could allow them to qualify on the Yellow medium tyre tomorrow.

Mario Isola: "We didn't see any particular surprises from today. Given that the track hasn't been used for quite a while and Formula 2 is the only support event, there was low grip, with a high degree of track evolution. We'd expect that evolution to continue throughout tomorrow as more rubber is laid down on the track. This year, we're bringing softer tyres than before, which obviously means that drivers have to manage their pace more carefully over the longer runs. As expected there was high wear on the soft compound, with some blistering seen on the front-left. Behind the Mercedes - which were particularly impressive on the harder compounds - the pace seems to be closely matched, and the performance gaps between the compounds suggests that many different strategies are possible. These strategies of course begin with qualifying tomorrow: it's going to be interesting to see which teams feel confident of getting through Q2 on the medium compound."