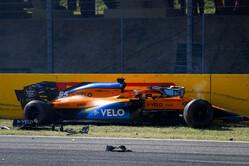 The 'drivers' 'union', the GPDA, has written to race director, Michael Masi, following the restart incident at the Tuscan Grand Prix.

In the hours after the race, following which 12 drivers were officially warned over their driving conduct, a number of drivers condemned the restart, with Lewis Hamilton suggesting that entertainment was being put before safety, a claim that Masi vigorously refuted.

We have had a few discussions with Seb, Alex and Anastasia in our GPDA WhatsApp group," said the Frenchman, referring to Anastasia Fowle, the GPDA's lawyer.

"We wrote a letter to Michael Masi trying to find out what we ca do better," he continued. "I don't think there was anything standing out in Mugello in terms of restarts, it was a lot of small things that led to a big crash at the end, but maybe a few tweaks in some of the rules could possibly help.

"That's what we want to discuss, to avoid such a scary moment," he added. "I guess we were kind of lucky with everything, that we didn't end up with someone being hurt, because it was quite a high-speed crash, and also a car flying into the fence could have been a bit naughty."

"Are there tweaks in the rules we can think of for the restarts? Probably," said the Haas driver in a subsequent interview with Sky Sports. "Looking at rolling starts and things like that that have been done in other categories.

"The GPDA we had some brainstorming on it and see how we can come up with a better solution for everyone."

"I think it's very simple," added Vettel, a fellow director of the GPDA, "there were some things going on that maybe we can't be happy with. But I would like to keep the dialogue between Michael and ourselves."

"I think we need to take some lessons and learn from it," said Carlos Sainz, one of four drivers eliminated in the accident that followed the infamous restart. "I think we as drivers didn't make our lives easy by some people second guessing the start, and making it very complicated for the people at the back. And we're definitely going to discuss that tomorrow.

"We need to analyse together with the FIA what we can do better because the crash was huge. And it could have been a lot worse, I think, especially when I look back.

"So how are we going to avoid that in the future needs to be discussed privately, but I definitely think we need to have a proper look all together, have all our thoughts, brainstorm a bit of how can we try and avoid it next time.

"I personally want to wait for the drivers briefing to hear everyone's opinion and to analyse what some drivers have to say and why they left those big gaps. And why the safety car lights were late out and all those things.

"I want to hear everyone's opinion before taking some conclusions, and before forming a bit of a group and discussions to potentially make things better next time.

"I think we just need to sit down clearly, discuss, have everyone's opinion, and see what we can do better. But I don't think it's right either to criticise drivers or criticise the FIA publicly, I feel like it should be discussed internally always."