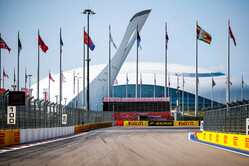 Having seemingly learned nothing from Monza 2019, drivers continue the practice of deliberately backing up in order to create a gap to the car ahead before beginning a flying lap. While this happens in FP2 and FP3 it has reached levels of utter stupidity during qualifying.

While there have been a number of near misses, it is only a matter of time before there is a really serious accident, not to mention that the backing up of long trains of drivers has resulted in some being unable to cross the line in time to even begin another 'flyer'.

Consequently race director, Michael Masi has advised the teams that drivers are not to drive unnecessarily slowly at Turns 12 and 13, the point at which the second DRS zone ends.

"Any driver intending to create a gap in front of him in order to get a clear lap should not attempt to do this around Turns 12 and/or 13," he warned. "Any driver seen to have done this will be reported to the stewards as being in breach of Article 27.4 of the sporting regulations."

"A lap time achieved during any practice session or the race by leaving the track and failing to negotiate Turn 2 by using the track, will result in that lap time being invalidated by the stewards.