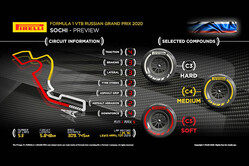 This choice has been made based on the smoothness of the asphalt at Sochi, which is well-known for being relatively easy on tyres.

The weather is also generally mild in Sochi and there aren't many high-energy corners, making the three softest tyres in the P Zero F1 range the ideal choice.

Inaugurated in 2014, the asphalt in Sochi has gradually matured over the years. Nonetheless, the track is still well-known for offering comparatively low levels of grip.

The tyre choice is actually one step softer than last year, when the C2, C3 and C4 were selected. Most drivers stopped once in 2019: just five of the 15 classified finishers stopped twice and this was largely influenced by the safety car.

The most demanding corner is definitely Turn 3: a 750-metre constant radius left-hander, working the front-right tyre hardest. The rest of the circuit is largely composed of slow to medium speed 90-degree corners, giving Sochi something of the feel of a street circuit (having been built around the Olympic Park).

Mario Isola: "The Russian Grand Prix is one of the relatively few events this year to stick to its original calendar slot, which is at the same time as last year. Since then though, we've gone a step softer with the tyre choice, in order to provide extra speed and an additional challenge in terms of tyre strategy. Thanks to the current reduced tread depth, which was first introduced in 2019, the softer C3, C4 and C5 nomination this year should encourage the use of all three compounds without the drivers having to manage them extensively during the race.

"With last year's strategy having been heavily influenced by neutralisations - plus 2020 cars that are faster than ever before - the teams will certainly have a few unknowns heading into this year's Russian Grand Prix. Having said that, Sochi places relatively low demands on tyres, so a one-stop race should still be possible. The teams will work out during free practice if this is still the fastest way: which we expect to be a popular choice as teams tend to target one-stoppers whenever possible."