"I don't look at the media," says Albon 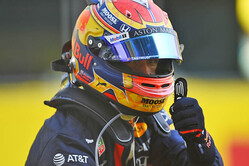 It remains to be seen whether his podium finish at Mugello silences those in the media, particularly the Sky F1 team, in terms of Alex Albon's future at Red Bull.

In the weeks leading up to the Tuscan Grand Prix barely a session's coverage passed without all and sundry voicing their doubt over the Thai driver's suitability for the role, while championing the form of Pierre Gasly at AlphaTauri.

In time, even Lewis Hamilton felt obliged to share his thoughts, while Gasly's win at Monza sent the speculation into overdrive.

While it is hoped that his third-place in Tuscany will ease the constant criticism, the man himself admits that he gives the media a wide berth.

"I don't look at the media," says Albon. "I know there's always going to be talk about it, it's a hot topic for you guys.

"You kind of just move on from it," he continued. "My trust and my confidence comes from speaking to Christian or whoever, or Dr Marko personally. And I feel a lot of support from both of them, from this whole team as well."

Indeed, while team boss, Christian Horner has been supportive throughout, so too - much to the media's obvious surprise - has Helmut Marko, a man not known for his patience or his forgiving nature.

"I'm relaxed," said Albon. "I know I need to improve, I want to improve and I'm keen and I'm motivated to do that. So with all the support from the guys around me, I'm happy with where I am in the team, and it's more, you could say, the media that creates the noise."

Asked if there was a particular point he began avoiding the media, he said: "It's just one of those things.

"It's like, what's the point of looking at your phone if it's negative, you know?" he continued. "There's not really any point. I'd rather use that time to have dinner, go on Netflix, or whatever.

"At the end of the day, I know what matters is my performance. That's what I'm focused on. I'm not focused on the other stuff."