"He has to get this out of his system", says Horner of Verstappen 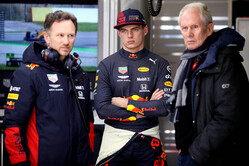 It seems like only yesterday that some were opining that Max Verstappen could still challenge Lewis Hamilton for the title. And despite the disappointment of retiring from the season opener, a subsequent run of six podium finishes suggested that the Dutchman could indeed spring a surprise.

Then came the madness of Monza and the mayhem of Mugello, and once the dust had settled the Red Bull driver only had two DNFs to show for it, retiring with an engine issue from the former and crashing out of the latter, though that too was power unit related.

Following a late issue on the grid, though he was able to start the race, getting ahead of pole man Hamilton, who had already lost out to his Mercedes teammate, Verstappen subsequently lost power and slipped back down the order until being helpfully punted off at the first corner to put him out of his Mugello misery.

"This is what you get with this f****** sh** show," declared the youngster over the team radio as he clambered from his car.

"Max's frustration at another DNF is totally understandable," says Christian Horner, in a review of the weekend for the Ted Bull site. "From the very first lap in Mugello he was on it. We had a very fast car and some real progress has been made with the balance of the car. That is what was so galling for him. In the heat of the moment when you have gone from the adrenaline of the start to the disappointment of ending up in the gravel trap, it is only natural to vent on the radio.

"We really felt that in the race we could take the fight to Mercedes," he admits. "He had done the hard work in beating Lewis off the line and it was going to be game on, but of course that did not materialise.

"It was the second race in a row and a huge frustration for him because he is hungry and wants it so badly. If he did not have that hunger, he would not be the driver he is and the one that we all want to watch fight for victories each weekend.

"He has to get it out of his system now and then look forward. We will go through it with him prior to Sochi and discuss what has been done behind the scenes between Honda and the Team to help so it is rectified for the next race."